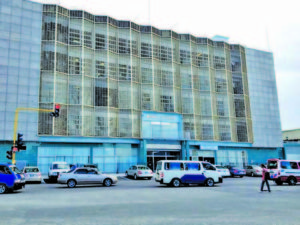 While the A Partnership for National Unity/Alliance For Change (APNU/AFC) artificially prolongs its time in office, the Bank of Guyana has sounded the alarm on the impending economic gloom facing the country.

In the Bank’s recently released quarterly report and statistical bulletin for the first quarter of 2020, it was observed that Guyana will be unable to escape the effects of the expected slowdown in global economic growth.
In fact, the report notes that the world is likely to experience the worst depression since the great depression of the 1930s. According to the report, a number of businesses and the ordinary man, are likely to be affected in Guyana during the remainder of 2020.
“The daunting prospects for the global economy are likely to adversely impact commodity-exporting economies like Guyana, as demand for exports are expected to decline resulting in lower export prices.”

According to the Bank, the global slowdown coupled with the several measures Guyana has taken since its first COVID-19 case on March 11, 2020, will have a debilitating effect on the economy. Among the alarming projections the Bank made, was a rise in unemployment.

“These measures, which have limited business activities and mobility, are expected to result in a decline in economic growth, largely in the services sector. A number of businesses in the services sector, particularly wholesale and retail trade and transportation, will be affected and subsequently, unemployment levels will increase.”
Another worrying projection the Bank of Guyana made, was a rise in the balance of payment deficit. Balance of Payment (BoP) or trade balance, is a summary of statistical data on a country’s fiscal transactions, including imports and exports. To record a deficit, Guyana would, therefore, have had to spend more on imports, among other things, that it derived from exports.

The last time in recent history that Guyana’s trade balance recorded a surplus was under the People’s Progressive Party (PPP) Administration in the years 2009, 2010 and 2012. But the main export earners, in particular sugar, have suffered under the current Government. According to the report, the situation will only get worse due to the decline in export earnings.

“The balance of payments deficit is projected to expand on account of declining export earnings, remittances and FDIs. Foreign exchange earnings will undoubtedly decrease, resulting in lower international reserves,” the Bank stated.
“The contraction in business activities will significantly reduce Central Government’s revenues and this, coupled with the expenditure Government will have to spend to aid the fight and recovery of the coronavirus, will lead to a larger fiscal deficit. Consequently, debt levels will rise as the Government seeks to fill financing gaps.”

No stimulus package from Government
Since the detection of the deadly COVID-19 disease in Guyana, the APNU/AFC Government has taken a number of steps from closing its borders to mandating that only essential businesses open their doors. The remaining businesses have received nothing in the form of a stimulus from the Government, which last passed a budget in November of 2018. There have been reports of workers being laid off, businesses closing their doors for good and investments being held up.

The economic problems created by COVID-19 are compounded by Guyana’s political crisis. It has been over four months since Guyanese went to the polls and there has been no lawful result. APNU/AFC has taken issues surrounding the election before every court from the Court of Appeal to the Caribbean Court of Justice (CCJ), using arguments that many have described as frivolous and designed to waste time.

The international community has overwhelmingly declared that the results from the 33-day National Recount, which show a People’s Progressive Party (PPP) victory, should be used to declare a President. Calls urging President David Granger to concede have come from several US politicians, the United States, United Kingdom and Canada, other countries and organisations around the world and even the President’s own son-in-law, Dominic Gaskin.
Many, such as the Organisation of American States (OAS), have urged the APNU/AFC to begin the process of transition, which will allow the legitimately-elected Government to take its place. In fact, the OAS is scheduled to discuss Guyana’s political crisis at the level of the Permanent Council on Tuesday.

But the APNU/AFC has been defiant, using supporter Misenga Jones to go to court to compel the Guyana Elections Commission (GECOM) to use declarations tainted by fraud to declare the election results. This is despite GECOM Chair, Retired Justice Claudette Singh discarding these declarations and directing the Chief Elections Officer that the recount results be used. He too has been defiant.

During the oral submissions to the court on Friday, Senior Counsel Douglas Mendes told the court that if it were to allow the CEO to present his own figures, which consisted of the fraudulent figures of embattled Returning Officer Clairmont Mingo, then it would not only be undermining democracy and the rights of people to elect their representatives but also rewarding criminality.