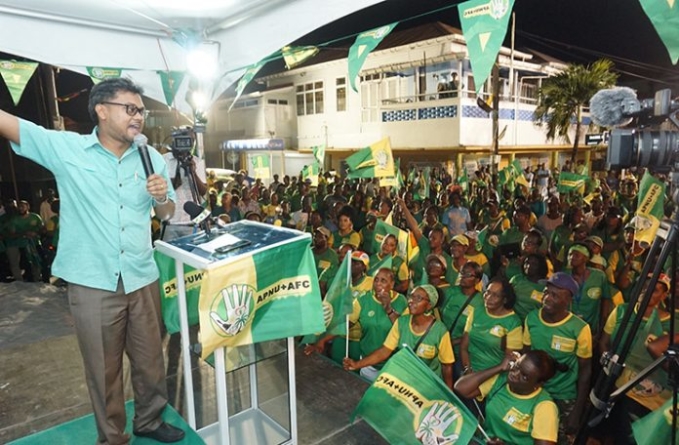 Presidential candidate for the incumbent A Partnership for National Unity+Alliance For Change (APNU+AFC), David Granger Friday night appealed to eligible voters in Region Four (Demerara-Mahaica) to ensure a more than 80 percent turnout at the polls on March 2, as he was dissatisfied with their participation in 2015.

“Tonight, my comrades, you have to win the battle of numbers,” he said. “The problem I face tonight is that twenty-five percent of this region was Absent Without Leave. If I was in the army, I would have court-martialled them but these are my friends,” mused Granger, a retired Brigadier of the Guyana Defence Force. 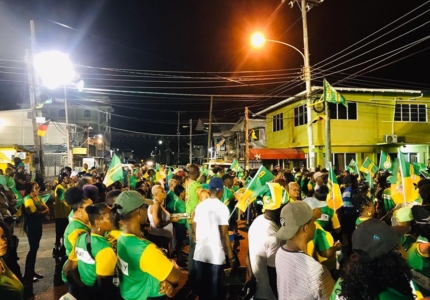 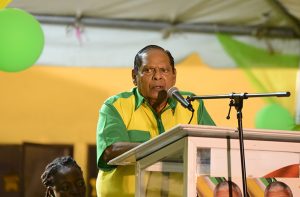 Granger, in his reelection bid, reasoned that an 80- to 85-percent turnout in Region Four would see the return of the APNU+AFC coalition because it is the most populated. “Because four out of every ten Guyanese live in Demerara, if we win this region convincingly, we win the whole election. This is a battlefield region and we have to win the battle right here on the East Coast, right here in Demerara. This is a battle that we must win,” he told a campaign rally of thousands of supporters at the Golden Grove Community Centre ground.

He said “we have to win the battle of numbers” because back in 2015 there was a 75-percent overall turnout by electors in Region Four. Of that number, he recalled that APNU+AFC won 61 percent and the opposition People’s Progressive Party (PPP) won 39 percent.

“Can you imagine that after twenty-three years of punishment, thirty-nine percent of the people in this region still voted for the PPP?” he said.

APNU+AFC candidate and Chairman of the People’s National Congress Reform, Volda Lawrence is on record as saying that the coalition was aiming to win 40 of the 65 seats in the National Assembly.

Granger, a former member of the Disciplined Forces Commission and who has written extensively on national security, credited his administration with demobilising the ‘phantom’, a reference to alleged state-sponsored and associated death squads between 2000 and 2010, ending political-racial divisiveness, improving the lives of youths and supporting entrepreneurship.