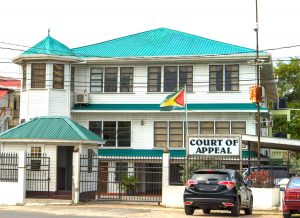 The building that houses the Court of Appeal in Kingston, Georgetown, has been earmarked to undergo an extension, according to a notice published in the daily newspapers by the Registrar of the Supreme Court of Judicature, Sueanna Lovell.
The notice specified that bidding for the extension of the court will be done through the National Competitive Bidding Process specified in the Procurement Act 2003.
According to the advertisement, eligible bidders may obtain further information by contacting the Registrar of the court at Lot 1 Avenue of the Republic and Charlotte Street, Georgetown, from Monday to Friday between working hours. Bids will be opened on December 1 at the National Procurement and Tender Administration Board (NPTAB).

It was previously reported that the extension of the Court of Appeal was delayed due to a dispute over the land. The Court of Appeal currently has one courtroom.
In recent times, the Judiciary of Guyana has been taking steps to ensure that justice is delivered efficiently with the extension of the High Court in Georgetown, the construction of new Magistrates’ Courts, the renovation of others, the opening of new Magisterial Districts, and appointing new Judges and Magistrates.
Moreover, the Judiciary has been praised for decentralising the magistracy given the country’s geographical layout, which makes travelling and communication very challenging at times.