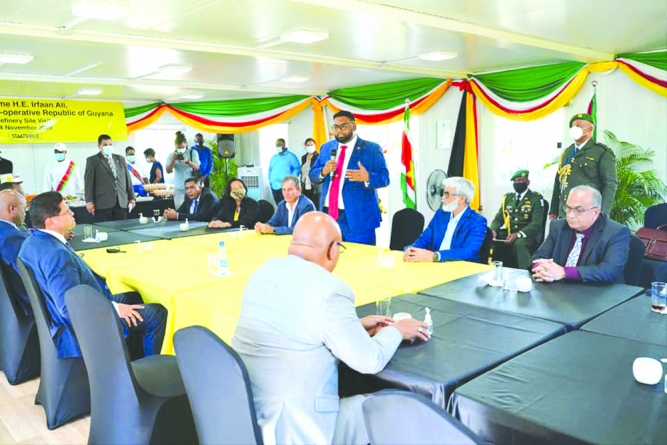 Guyana’s President Dr Irfaan Ali and his delegation on Tuesday made a site visit to Staatsolie; the State oil company in Suriname, where he underscored the need for both countries to work together rather than to compete regarding the development of their oil and gas resources.

“It is important that we bring synergies with what we do especially with the oil and gas sector. Yes, we are small counties, small populations, small human resource base, small investment portfolios but if we bring synergy to what we do we can have greater benefit, greater local content and more resources flowing inward into the local economy,” Ali posited following the site visit.
With both Suriname and Guyana making massive oil finds in recent months, President Ali said that while there are questions about a shared shore base project or deep water harbour, at this time both countries are exploring synergetic benefits. He added that discussion would ultimately progress from there but reiterated that identifying and aligning synergies remain the top priority of both Governments.

“When we talk about local content because of how the industry would emerge you can either be in direct competition with each other or you can either be supporting each other with synergies that bring benefits to both countries and that is the type of decision we have to make. That is the type of policy framework and formulation that we have to discuss.
“That is why these working groups are set up so that we are making decisions critical for the advancement of our countries long before we get to that point. So, we are hoping towards those synergies and that is why establishing and creating the necessary infrastructure that will enable us to achieve these goals are so essential and not only essential, but important to be accelerated if we are serious about making those synergies a reality,” the President posited.

President Ali acknowledged that it is true that both countries have shared challenges, shared threats and shared circumstances but posited that it is equally true that they also have shared opportunities ahead. He added that they are also looking beyond the oil and gas sector and seeking to bring synergies in the agriculture and tourism sectors among others.
“Opportunities that could only be realised if we have greater cooperation, greater collaboration and greater integration. This is what is going to lead to lasting sustainable relationships that will ultimately benefit the people of our country. Relationships based on mutual respect, shared values, development focus, people focus, focus on the integration and regionalisation of our people in an open and transparent manner, results-oriented forward-looking whilst recognising our individuality based on trust and joint action. This is what we are achieving together,” Ali said.

Guyana and Suriname, two emerging nations on the oil and gas front, have committed to lending support to each other to build capacity within the sector.
Suriname, a former Dutch colony, shares with its neighbour the offshore Guyana-Suriname Basin, which the US Geological Survey (USGS) estimates to hold almost 14 billion barrels of oil and 32 trillion cubic feet of natural gas, according to Oilprice.com.
Oilprice.com recently stated that the part of the basin is under-explored and energy companies have not experienced the same degree of success as Exxon, Hess, and Tullow in Guyana. It is, however, believed that the US Geological Survey has underestimated the basin’s hydrocarbon potential, and recoverable oil and natural gas resources could substantially exceed its original estimates.

The Guyana-Suriname Basin’s considerable hydrocarbon potential is demonstrated by ExxonMobil’s multiple significant oil discoveries in Guyana’s offshore Stabroek Block, Oilprice.com had stated.
Exxon has estimated that the total recoverable resource of Guyana’s Stabroek block to date amounts to more than 8 billion oil-equivalent barrels.
Meanwhile, President Ali explained that the cooperation talks go way beyond the oil and gas sector to include other critical areas of development including agriculture and tourism.
President Ali was accompanied by the Surinamese President Chandrikapersad Santokhi and members of his Government.

President Ali is on his first overseas visit since taking office. He will make an address to the Surinamese National Assembly in an extraordinary public meeting today.
The Surinamese Head of State had visited Guyana back in August for the inauguration of President Ali.
In an update on their meeting in August, President Ali had indicated that the engagement between the two Heads of State was extensive, covering multiple sectors, and was aimed at strengthening the existing relationship between Guyana and Suriname.
The President is accompanied by a high-level delegation who are also engaging in discussions in several other areas of cooperation.