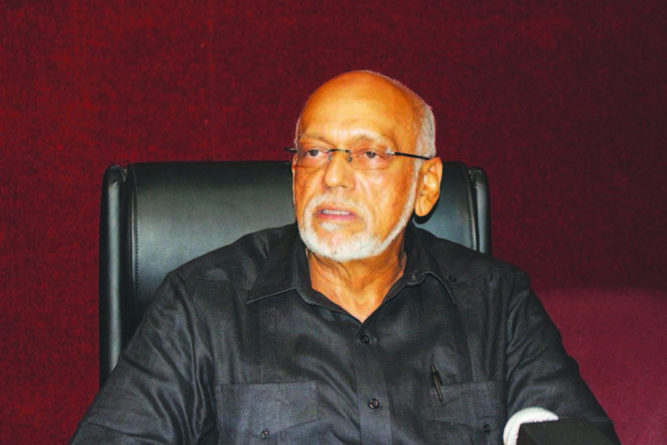 The PNC-led APNU+AFC was caught red-handed attempting to steal the 2020 General and Regional Elections. Even though thoroughly exposed the regime has pushed ahead shamelessly.

Under the threat of sanctions from the international community, including the US, the small cabal continues to try to stifle the will of the people exploring every crack to prolong their illegality.

In the face of this betrayal of our country some of the PNC’s allies and friends have come out with the call for ‘power-sharing’.  They manufacture all kinds of arguments to perpetuate the PNC in power.

I am amazed at this call in the light of an attempt to steal the elections, an attempt at fraud against all the people of our country.

Clearly to speak about power sharing in this circumstance is putting a premium on the PNC/APNU’s cabal crookery.

This is an attempt to reward the PNC elite for all their wrongdoings.  Not one of them has out-rightly and unconditionally condemned this atrocity.

One of the arguments used is that we are a multi-ethnic society and we should ‘share power’.

Guyana is not the only multi-ethnic society in the world or in the region. None of which have the same problem created as in Guyana by the PNC/APNU.

Take Trinidad & Tobago for instance, that country’s demographics closely approximate ours, but those questions never arise there. Trinidadians do not go through what we have to endure because of the corrupt elite that controls the PNC/APNU+AFC.

Therefore, that argument does not hold water.

Moreover, it should be pointed out that talking about ‘power-sharing’ as a means of dealing with the racial/ethnic issue will not work. In my view it will institutionalize racism in Guyana. It would be telling us that PNC owns Afro-Guyanese and that no matter how corrupt the leadership of the PNC is, no matter how much they abuse Black people, they will still support the PNC.

This is a position that no right-thinking Guyanese can tolerate.

The reason that Trinidad & Tobago does not experience this trauma is because it has created a normal, civilized society. All the political parties and civil society respect and uphold the constitution and respect the laws. Its institutions including the judiciary, are independent.  Its courts would never give the outrageous decisions as often emanate from our courts. The Elections Commission there displays a genuine sense of fair play. The integrity of the officers is intact. The outcome of elections is rarely questioned.

That is where our main problem lies. The PNC has never shown any respect for our constitution or the rule of law. To them the constitution is just a piece of paper that is to be violated.  In their Sophia Declara-tion the PNC sees the Government as the Executive Arm of the PNC.

Another important matter is the question of leadership.

The PNC has never given proper leadership in this country. They have misled ordinary people. They organize fundamentally on racism. They have been guilty of misleading their supporters and fostering division in our country.

The PPP has always sought to promote unity of our people. It is this stance of the PPP and PPP/Civic that has limited the PNC’s anti-national, racist practices.

That policy has been paying off. This last election, the PPP/Civic would not have won if every single Indo-Guyanese voted for it, because no racial group has a majority in this country. The PPP won because it got cross-over votes from Afro-Guyanese and from the Amerindian community.

Its hard work to promote national unity has been paying it big dividends and will pay even greater benefits in the future.

Inclusivity will not come about with the crude constitutional engineering being proposed, even if some do so honestly. Inclusivity will grow in a democratic atmosphere, in a normal society which must be based on respect for our constitution and the rule of law.

The best service that the PNC can do for the country is to allow a transparent recount and respect the will of the people. If they do so, without being forced, that would show that the regime is willing to begin a process of reforming itself so important for national development.