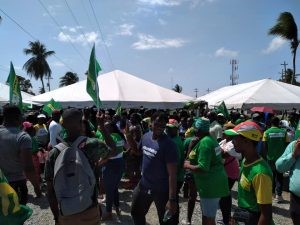 A Partnership For National Unity/Alliance For Change (APNU-AFC) coalition has challenged results from several regions.
The disclosures were made last evening by President David Granger to supporters and coalition officials at his campaign headquarters on Lamaha Street, Cummingsburg.

Scores of persons converged on the location where Granger announced that the Guyana Elections Commission (GECOM) has not received all the statement of polls.
He said that the Coalition has challenged results from a number of the regions.
Granger also told his supporters that the People’s Progressive Party/Civic has also wanted recounts in some areas. Those recounts are underway.

Granger, who is facing being described as a one-term president if the Coalition loses the presidency, made it clear that he had hoped for an official declaration by GECOM by yesterday.
This is not possible with the recounts ongoing.
He said that the verification would be going on throughout the night.
The President appealed to his supporters to be patient with the hope that an announcement could be made today by GECOM of the results.

As of last evening, no one knew the final score, the President said.
“Tonight, I asked you remain calm…”
General and regional elections were held last Monday after more than a year of legal battles following a no-confidence motion that was passed against the government on December 21, 2018.

The next government that is sworn in will manage Guyana’s oil wealth.
Production commenced last December on one of the biggest finds in years in this part of the hemisphere.