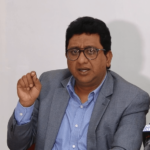 Peoples Progressive Party/ Civic (PPP/C) candidate, Anil Nandlall, has lashed out at leading members of the A Partnership for National Unity/ Alliance For Change (APNU/AFC) over accusations they have made against him in relation to his alleged distribution of ID cards.

“I want to denounce as absolute lie, a video that I see circulating on Facebook in which Amna Ally and Basil Williams have made accusations against me that I am involved in the distribution of ID cards. It’s preposterous, it’s ridiculous and Basil Williams and Amna Ally know that they are lying. “I was called minutes before to that very location by my candidates who informed me that a crowd had gathered from another community and that crowd was misbehaving and was making a lot of accusations and they were cursing and abusing persons who were going to vote. It is my duty and my responsibility to go there to investigate that. I went there immediately as I am entitled to do.

When went there I met this hostile crowd that I didn’t understand what they were saying. I didn’t realise they were accusing me of what they were accusing me of. Anyhow I ignored them. I went in to the compound, I got the police to give me additional reinforcement to the polling place and I explained to them that this crowd is affecting my voters from voting and I am requesting reinforcement. “I remained silent, I didn’t react because I’m experienced in these matters, I know if I say anything it will make it worse. When Basil Williams and Amna Ally entered, I thought I was talking to intelligent, mature, experienced politicians who would have been able to rise above the foolish fray and low and behold they were mouthing the identical accusation. These people are absolutely ridiculous. Where and what would I do with ID Cards?”