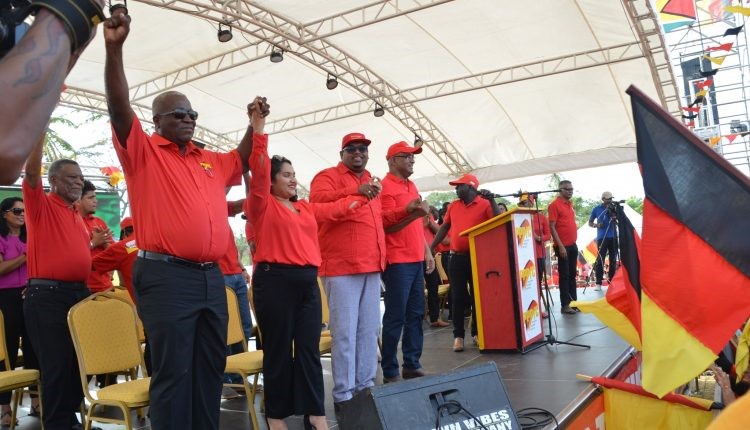 The People’s Progressive Party/ Civic (PPP/C) on Thursday highlighted the contribution of the 1973 ‘Ballot Box Martyrs’ in the continuous fight to uphold Guyana’s democracy, saying that the sacrifices made then are still relevant today.
During the 1973 election, two men, Jagan Ramessar, 17, and Bholanauth Parmanand, 45, tragically lost their lives in the act of safeguarding Guyana’s democracy.

The men, who were a part of a crowd outside of a No.63 village polling station were fatally shot by a rank of the Guyana Defence Force on July 16, 1973 while peacefully protesting the illegal removal of ballot boxes.
Forty-seven years later, Guyana still finds itself in the fight for democracy and electoral process free from ‘rigging.’ On Thursday wreaths were laid at the grave of the two men at the Number 66 Village Cemetery.

Executive Secretary of the People’s Progressive Party Zulfikar Mustafa related that 47 years ago the two young comrades who are referred to as Patriots made that sacrifice in the fight for democracy.
He noted that this did not stop the struggle for democracy as Guyanese made sure that the sacrifices were not lost by winning the 1992 elections.

“We had 23 years of continuous growth; 23 years of democratic government in our country up until May 2015. Once again the sacrifice paid by Ramasar and Permanand has pushed us as a people to recommit ourselves to prevent the stealing of our country by this de facto government.”
He said we are now witnessing a new dimension in our struggle today, hence Father Drake, Walter Rodney, Michael Ford others made the ultimate sacrifice has left an example for us.

Mustapha urge those present to continue the struggle to ensure that Guyana returns to be a democratic nation- one that will be respected and admitted by the world.
“The entire world today is against the stealing of our country and the stealing of the will of the Guyanese people and until we return to democracy and have the rightful government in place. The Peoples Progressive Party will continue the struggle that ensure that Guyanese and Guyana return to the Democratic fold of Nations. So on this day, July 16, I want every single Guyanese to recommit themselves and insured at the pledge continue the fight for our Democratic gain.”
He noted that four months has passed since the March 2, General and Regional Elections and the results are yet to be declared.
“Today it is over four months since we had our elections obscene. We are seeing all kinds excuses and all kinds of plans by this APNU/ AFC government to return our country to those dark days prior to 1992.
The Party Executive Secretary added that as a nation, we must remember the sacrifices of The Ballot Box Martyrs’ and the sacrifices of others who continue to fight for democracy.

Meanwhile, former President, Donald reiterated that Jagan Ramesar and Bhola Nauth Parmanand were killed while trying to defend the votes at the No. 64 Village Polling Station.
He noted that counting the votes at the place of poll is, in the Guyanese context, vital for free and fair elections. This is now being demonstrated once again as the struggle to protect the people’s votes cast during March 2, 2020 continues.

“In commemorating those two heroes we must not forget one of the local leaders on that day who passed away on Christmas Day 2019, Cde. Rishi Ram Motie. He was very young at the time just twenty-two, but he led that struggle that day and stood like a giant defending democracy. He suffered injuries attempting to protect the people votes. He together with his wife Bijulee stood tall on that day.”
Their efforts then and over the years helped greatly to give the people of this country the opportunity to live in harmony in a democratic nation, Ramoutar noted.

“We still have a way to go but we have come a long way. For that, we must remember Jagan Ramesar, Bhola Nauth Parmanand and Rishi Ram Moti. Their deeds that day have immortalized them. Let us hold high the Banner of Peace, Freedom as we continue on the path blazed by so many who came before us including the Ballot Box Martyrs,” the former president noted.