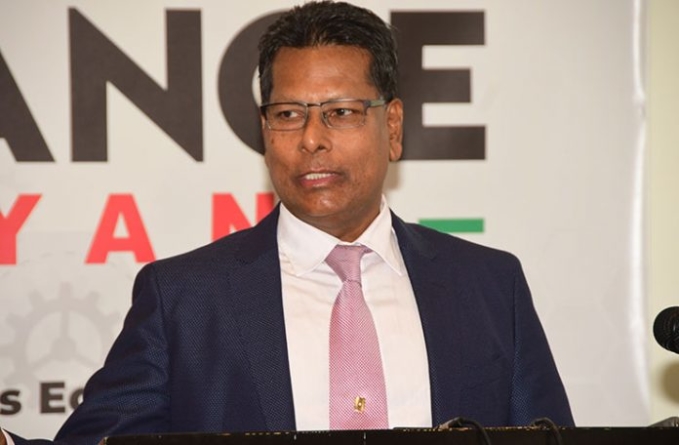 Change Guyana Presidential Candidate Robert Badal is promising to double the old age pension from $20,500 to $41,000 on his first day in office, and to implement a US$5 royalty on every tonne of bauxite shipped from Guyana if his party wins the coming election on 2nd March 2020.

The presidential hopeful also promised to ensure that local content legislation is passed within three months of being elected to office, a component of which will be the requirement that all foreign firms operating in the oil and its satellite sectors train Guyanese who will eventually be able to operate in all of these areas.

Meanwhile, the party’s former presidential candidate, Nigel Hinds, said that Change Guyana plans to pursue  a development trajectory which also considers, and addresses the issues which have stifled social cohesion for decades.

These revelations were made yesterday morning during the party’s weekly press conference where Badal dismissed the current old age pension rate as a shame. He projected that it will cost $1 billion to finance the increase, which he says will be garnered through “a more disciplined fiscal policy”, and reduction in wanton spending engaged in by the   A Partnership for National Unity+Alliance for Change (APNU+AFC) coalition and the People’s Progressive Party/Civic (PPP/C).

Badal also said that the money extracted from the royalties his government would impose on operators in the bauxite industry would be used to finance development in the Linden, Kwakwani, and New Amsterdam communities which are directly affected by bauxite mining. If bauxite companies operating in Guyana cannot make a profit while paying the proposed royalty, they will have to leave, Badal said.

Badal also promised to liberalise the telecommunications sector industry, while criticising the coalition government for failing, despite its promises, to do so. “A Minister focusing on this area in five years has done nothing”, Badal argued, pointing to the establishment of the Ministry of Public Telecommunications, headed by Minister Cathy Hughes.

The liberalisation of the telecommunications sector was a major campaign promise made by the coalition ahead of its success at the polls in 2015.

Almost five years after winning the reins of government, however, the Guyana Telephone and Telegraph Company (GTT), owned by Atlantic Tele-Network, remains largely in control of the sector, with its only competitor, Digicel being limited to operations in cell phone services.

GTT therefore has a virtual monopoly on the sector, which Badal blames for what he says is poor quality services, and lack of innovation on the part of the company.

Badal also promised to deliver on a new bridge across the Demerara River in three years. This is another promise which has been made by both the PPP/C and the coalition, but which neither delivered on. Badal says the expansion works he is currently undertaking to the Pegasus Hotel stand as testament to his ability to conceptualise and implement large projects in a relatively short space of time. “In two years we have 10 times the floor space as the Timehri terminal [at the Cheddi Jagan International Airport], and we are doing it in two years. After 6 years, they cannot finish the existing terminal. We will build that bridge” Badal promised. He also said that whichever firm is selected to build the structure will be required to train the Guyanese subcontractors who will be working on the project so as to facilitate the transfer of the skills involved in such works. .

Badal explained that such transfer of skill and knowledge has taken place in the construction works on his hotel, as Guyanese have been trained to bend steel, and erect curtain walls.

Badal also said that he sees the need for, and would facilitate the construction of a specialty hospital. In 2012, the PPP/C had embarked on a project to construct such a hospital at Turkeyen, East Coast Demerara. The contractor, Surendra Engineering Company Limited, was awarded the US$ 18 million contract in August 2012 amid allegations of favouritism, and was subsequently fired by the Donald Ramotar-administration on a variety of grounds including fraud. In October 2015, the then PPP/C government filed a lawsuit against Surendra, accused the company of breach of contract and fraud and sought the recovery of the US$4.2 million in advance payments for the project. The APNU+AFC government sought to continue the project but it was ended in  2020.

Badal says Guyana’s high level of infant mortality, and other health issues indicate that such a hospital is needed.

Badal also promised to enter into a joint venture with Surinamese authorities to build a bridge across the Corentyne River, and to construct an East Berbice shore base and oil port base at which former sugar estate workers will be trained to weld and moor ships. “We are not re-opening sugar estates. We are taking them out, and train them so they can manage these facilities”, said Badal of his plan to retrain former sugar workers for lucrative careers in other vibrant industries.

Badal is also promising to complete a road from Mandela Avenue or Ogle to Timehri, and to create regional economic zones in regions and communities so that Guyanese living in housing schemes do not necessarily have to commute to Georgetown to find employment.

Badal also promised that his government would centralise all government offices on one campus, and increase government efficiency through the use of artificial intelligence. This, he said, will cut expenses currently and improve the effectiveness of operations.

The presidential hopeful also promised that a government under his leadership would pursue a course of regaining ownership of Guyana’s natural gas reserves which he says were signed away in the contract signed with ExxonMobil-subsidiary, Esso Exploration and Production Guyana Limited (EEPGL).

This gas, he said, can, and would be used to power manufacturing, and value-added to the natural resources exported from Guyana yearly in raw form. “We will create an industrial park and use the gas to ensure the development of bauxite to aluminum. Manganese, and other natural resources will benefit from value added. Guyanese will own it”, promised Badal, who lamented that the model by which successive governments have authorised the extraction of Guyana’s natural resources now means that “we have no stake in our resources.”

Badal also promised that government will construct a gold refinery, and that experts in jewellery making will be brought, under a government-sponsored programme to instruct Guyanese in that art. The objective, he said, is that “no gold leaves unrefined”

Badal also said that Georgetown, as a capital city, has surpassed its capacity, and that there must be a plan to, at least twenty years  in the future, move the capital city.

Badal also said that if his party wins, a government led by him would provide scholarships in science, technology, and all technical fields, provide export incentives to allow the private sector to drive export development, create a State entity dedicated to research and development, and set up an entrepreneur fund to provide financing to small and medium-scale start-ups, which can find the terms of commercial banks too onerous.