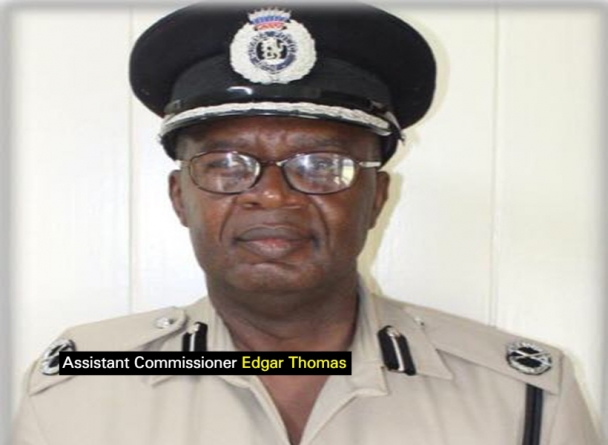 From Divisional Commander to patrol officer.
That’s the fate of Assistant Police Commissioner, Edgar Thomas.
A day after he refused an order to put a Guyana Elections Commissioner (GECOM) out of the GECOM Centre, Thomas was officially notified that he was being transferred to Police Headquarters, Eve Leary.
Kaieteur News understands that late Friday, Thomas received his transfer letter from the Administrative Department of the Force.

Sources said that the brief letter stated that Thomas had been transferred “with immediate effect” from his post as Commander of Division Four A, to Police Headquarters, Eve Leary.
The letter reportedly informed Thomas that his new position was ‘Patrol Officer.’ Kaieteur News was unable to ascertain what the portfolio of ‘Patrol Officer’ entails.

However, individuals in the Force suggested that this is a demotion.
An official from the Force’s Administrative Department declined to comment on the situation.
On Friday, Thomas was reportedly told he was being transferred because he had refused an order to remove GECOM Commissioner, Sase Gunraj, and others from the High Street media centre on Thursday night.

Kaieteur News understands that Thomas has said his decision to not remove Gunraj and others was “a judgment call.”
The junior rank who said he had been ordered to clear the building had reportedly not approached Thomas.
PPP-nominated Commissioner Sase Gunraj told Kaieteur News that he was with other GECOM staffers around 19:00 hrs on Thursday, when Deputy Chief Elections Officer, Roxanne Myers, indicated that she wanted everyone to vacate the building.
Gunraj said that he was speaking to Commander Thomas at the time.

According to Gunraj, he told Myers that he and Commander Thomas were discussing how to secure the room in which crucial documents related to the General and Regional Elections were stored.
He said that shortly after, four Tactical Services Unit (TSU) ranks approached.
One rank said that they had received orders for everyone to “clear the building.”
Commander Thomas reportedly told the rank, who is a Deputy Superintendent, that he was speaking with Gunraj regarding securing the building. He alleged that the ranks left, but returned some ten minutes later.
The same Deputy Superintendent again said, without going to Commander Thomas, that he had received orders to “clear the building.”

Thomas reportedly informed the Deputy Superintendent that the rank was being disrespectful.
The junior rank was reportedly told that he had failed to report to Thomas, who was in charge of the area.
Gunraj and others left the premises shortly after.
Assistant Police Commissioner Thomas is an Information Technology specialist.
He was appointed Divisional Commander of Division Four A in November 2019.
This area extends to Agricola, East Bank Demerara and to Cummings Lodge, East Coast Demerara.