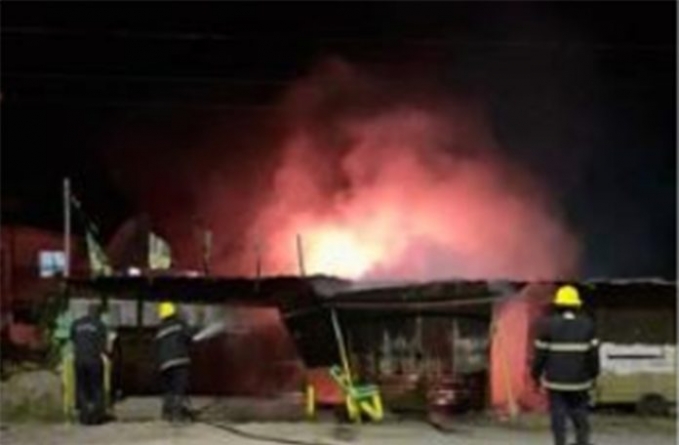 The butcher shop was owned by People’s National Congress member, Latchmin Azeez, and the arsonists are suspected to be activists of the People’s Progressive Party/Civic.

Mrs Azeez counted her losses, which include butcher shop tools such as knives, cutlasses, hand saws and weights and scales, to be over $120,000.

Mrs Azeez was pleased to say that since the blaze she had been visited by top PNC officials including Minister Amna Ally and she had been assured of her party’s assistance in rebuilding a new butcher shop.

Mrs. Azeez said that during the elections campaign and in the aftermath of the elections, her family had been under constant threats from PPP/C activists in the village which the PPP/C considers to be its stronghold.

She lives some distance away from the butcher shop and she related that it had been damaged and defaced on two occasions prior by persons suspected to be PPP/C activists.
She said she was at home when the Police visited her around midnight Friday night and told her about the fire at her butcher shop.

The blaze was extinguished by the Guyana Fire Service at Onverwagt, WCB, less than a mile away.

Regional Executive Officer, Ovid Morrison, in an invited comment, expressed disgust at the willful damage to property owned by the Azeez family in Bush Lot.