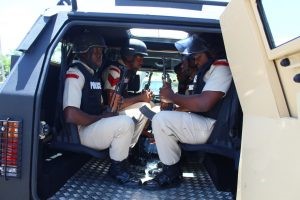 Guyanese and those looking in were on Friday subjected to violent riots and chaotic protests by supporters of the opposition People’s Progressive Party Civic (PPP/C).

This chaos and the after effects resulted in millions of dollars in destruction and in blood being shed. One protester, 18-year-old Devon Subhan, succumbed to gunshot wounds after he reportedly injured two police officers who were trying to keep the peace.

Tyres were burned, roads were blocked and innocent children and bystanders were injured. This stemmed from anger at the Guyana Elections Commission’s declaration of the unverified District Four results.
The Guyana Police Force, in a statement issued yesterday, stated that they have “been examining a piece of recently acquired Public Order Equipment” and are considering deploying it.

That piece of equipment is a heavily amoured vehicle, which, according to research is only employed for reconnaissance, internal security, armed escort, and other subordinate battle tasks.
The GPF cited the “situations across the Administrative Divisions which resulted in the death of a civilian, injuries to several Police ranks and infrastructural damages” as the underlying reason.

Further, the police sought to remind the general public of their mission statement which says that “the Guyana Police Force and its auxiliaries are to serve all the citizens and communities of Guyana in a professional, proactive and accountable manner.”

“To achieve this, we will work in partnership with communities, public agencies and private bodies to enhance and support an environment where all people are preventing crime and building a safer and secure Guyana,” the GPF mission statement said.