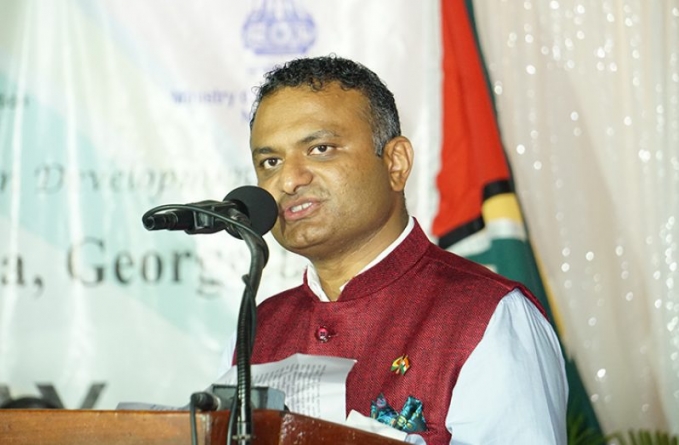 INDIA is actively engaging the Ministry of Public Works and relevant authorities with regards to approval of funds for the first phase of the Ogle to Diamond by-pass road project.
This is according to India’s High Commissioner to Guyana, Dr. K. J. Srinivasa, who also noted that funds were being approved for the construction of a ferry to ply the Georgetown and North-West District (NWD), Region One route.

The Indian Government has committed US$18 million for the ferry. Of this amount, US$8 million will be a grant while the remaining US$10 million will be a line of credit to be repaid within 20 years, with a five-year grace period.

He noted that various issues were raised about the ferry project, but once everything is sorted out, 18 months from approval, the ferry will be made available.
On the by-pass road project, he said: “Once the tender is awarded, we will have fast movement in the companies coming to work here, more than half of the contract value will be spent in the local supply chains.”

Guyana and India, in March 2016, inked a US$50M loan agreement for a new road to traverse between the East Coast Demerara (ECD) and East Bank Demerara (EBD).
Under the APNU+AFC administration, alterations done to the design of the road resulted in the cost spiralling from US$50 million to US$208 million.
In 2017, APNU+AFC Minister of Finance, Winston Jordan, had signed off on the US$50 million loan with the Exim Bank of India for the construction of a 20-kilometre road from Ogle on the East Coast of Demerara, to Diamond on the East Bank of Demerara.

The PPP/C Government has since amended the design of the proposed Ogle to Diamond by-pass road so the project cost could be in line with the available sums and the Indian Government has accepted the proposal.

However, Dr. K. J. Srinivasa noted that a study that was done showed that a total of US$177M was needed to complete the entire project.
As such, he explained that the project is divided into two phases and the first phase is already in process and there are formalities that need to be completed by the Government of India.

Further, he explained that a primary qualification will be done of eligible contractors by the EXIM Bank of India, then there will be a request for proposals along with a pre-qualification before tendering for the contract occurs.

Minister within the Ministry of Public Works, Deodat Indar, had noted that, after talks with the Indian Government, they are in agreement to accelerate the project.
He explained that the Indian Government will have oversight of the procurement process and will invite international bidders to submit bids. After re-examining the design of the road, they were able to amend the design to fit the sum available.

The US$50 million will see the first phase of the road constructed from Ogle, East Coast Demerara, to Haags Bosch on the East Bank and will later have a connection to Diamond, East Bank Demerara.

Indian company RITES Limited was awarded a US$1.3 million contract to undertake a feasibility study.