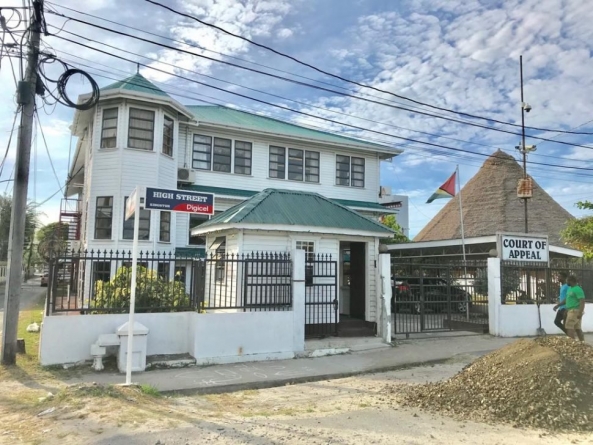 Justices Dawn Gregory,  Priya Sewnarine-Beharry and Rishi Persaud   today threw out the appeal of Misenga Jones against the decision of Chief Justice Roxane George that the recount votes be used for the declaration of the result of the March 2nd general elections.

The judges also ruled that the Chief Election Officer (CEO) must submit his Section 96 report on the basis of the recount of votes. Justice Sewnarine-Beharry said that the CEO is under the direction of GECOM.

Justice Gregory found that many of the reliefs sought by Jones were matters properly for an election petition. She upheld the recount process.

By a majority, the court first declined an application by Jones’ counsel, Roysdale Forde for a stay of execution. Justice Gregory said she was inclined to grant a stay of the day. However, Justices Persaud and Sewnarine-Beharry voted against.

However after a further intervention by attorney Maxwell Edwards for the Attorney General Basil Williams, Justice Gregory then said that two judges were willing to grant a stay of one day. Justice Sewnarine-Beharry then interjected that for the record she was against a stay.

When Justice Gregory had first asked Kim Kyte-Thomas, counsel for Claudette Singh, GECOM Chair,  what her position on a stay was Kyte-Thomas said she was vehemently against a stay. She declared the action before the court as “frivolous and vexatious” and added that it was untenable for GECOM to be detained from its work. She said there was noting to be stayed and wondered whether GECOM would be able to declare a result by 2025. “The work of GECOM must be completed!”, she thundered.

It was thereafter that Edwards was heard again as he said he had not been heard in full because of apparent technical problems and Justice Gregory then said that two judges were prepared to grant a 24-hour stay.

The impact of a stay was also raised at today’s hearings since several attorneys pointed out that the court made no order but rather it was the dismissal of an appeal which was seen to be an abuse of the court process. Under the circumstances it would appear that GECOM can still proceed with a declaration.

Jones’ appeal contended that Justice George-Wiltshire erred in law in her pronouncements on the recount, the results of which she said is the only data that could be used by the Guyana Elections Commission (GECOM) to declare a winner of the elections in keeping with a judgment by the CCJ.

Jones was challenging the validity of Order 60, which facilitated the recount.
As Jones also contended in her appeal, Williams wanted the court to set aside the Chief Justice’s findings that that Section 18 of Election Laws (Amendment) is not in conflict, or tension, with Article 177 of the Constitution, and that it does not breach the separation of powers doctrine and that it is accordingly not unconstitutional.