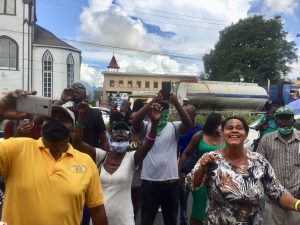 The crowd expressed displeasure and anger about the fact that Lowenfield was summoned to court to answer to three private criminal charges; fraud, misconduct in office, and breach of public’s trust. The charges were brought by Opposition People’s Progressive Party (PPP) member Desmond Morian and The New Movement Party (TNM) executive Dr. Daniel Josh Kanhai. Morian is represented by attorney-at-law Glenn Hanoman while Kanhai is represented by Mark Conway and George Thomas.

The courtroom in which Magistrate McGusty presides over is situated near the public road, at the corner of the Avenue of the Republic and Croal Streets, Georgetown. Not only did the supporters ignore the COVID-19 restrictions but also disregard that near the court is a noise-free area.

Throughout the hearing, there was an increase in security at the court with police officers stationed on the pavement outside of the court compound and around the building. The number of supporters kept increasing as they gathered at the main entrance of the court where the reporters were standing and started shouting, “Valid votes, valid votes, no surrender, no surrender,” while others shouted “Free Lowenfield”.

When the matter was finished, as attorneys-at-law Glenn Hanoman, Mark Conway and their clients were exiting the court compound, the coalition supporters rushed to the gate and started shouting, “Y’all is some crass, get y’all crassing self out of the place.” The supporters then followed them to their vehicle where they then gathered around and started hitting on the automobile shouting, “Get out the damn place, crasses.”