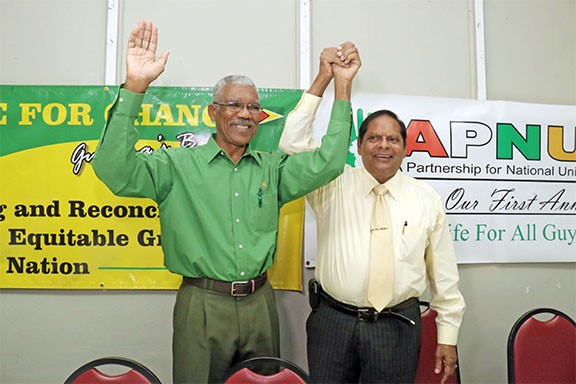 A Partnership for National Unity + Alliance For Change (APNU+AFC) has said in a recent statement on its Facebook page, that the Coalition is supportive of a national recount of all votes from the March 2 General and Regional Elections.

This follows statements from two factions of the Coalition, the Working People’s Alliance (WPA) and Justice For All Party (JFAP) calling for a national recount, after the CARICOM-supervised recount was blocked by a series of injunctions sought by an APNU+AFC candidate, Ulita Grace Moore.

The WPA more recently called for the recount, and urged that all political parties accept its credible results.
Hans Dominic Gaskin of the AFC has been most outspoken in his calls for a recount. He has registered his doubt about GECOM’s declaration of Region Four’s results, though the party has maintained its individual silence on the matter.
JFAP, on the other hand, called on President and APNU+AFC presidential candidate, David Granger to “allow” the recount process.

It was Granger who brokered an agreement with the leader of the main opposition party, People’s Progressive Party (PPP), Bharrat Jagdeo, to propose a CARICOM supervised recount. He had expressed that he is not comfortable being sworn in on the basis of results that are under such grave contention.
The high-level delegation even arrived in Guyana last week, ready to supervise the recount.
President Granger did say, following news of the injunction, that he is deeply disappointed that the recount has been stalled.

Moore’s interim injunctions have blocked the recount on the premise that it cannot happen with the terms of the aide memoire signed between Granger and Jagdeo.
Another candidate of APNU+AFC, Ganesh Mahipaul, recently told Kaieteur Radio that Moore’s effort to prevent the CARICOM-supervised recount is only proof that Guyana has become a functional democracy under the stewardship of President Granger. He had said that the party is diverse, and that it will naturally have members who have diverse opinions.

The skeptics don’t quite see it that way.
Presidential candidate for A New and United Guyana (ANUG), Ralph Ramkaran wrote about the matter in the most recent edition of his weekly column, The Conversation Tree.

He said that “Moore’s lawyer, Mayo Robertson, was joined by a distinguished array of Guyanese and Caribbean-wide attorneys. Among them were Roysdale Forde SC [who is also a candidate of APNU+AFC], John Jeremie SC, former Attorney General of Trinidad and Tobago and several juniors and Professor Francis Alexis SC, former Attorney General of Grenada.”

Ramkarran doubted that “such a high-powered team of expensive lawyers can be mobilised without the financial and political support of… APNU+AFC…”
He concluded that APNU+AFC is united behind Moore’s effort to prevent the recount of votes.

The PPP also voiced its concern about what it considers “hypocrisy” from APNU+AFC, pointing out the candidate, Moore who filed the case. It also mentioned Forde’s involvement. The main opposition party maintains that the national recount is absolutely necessary if the results of the elections are to be adjudged as credible.