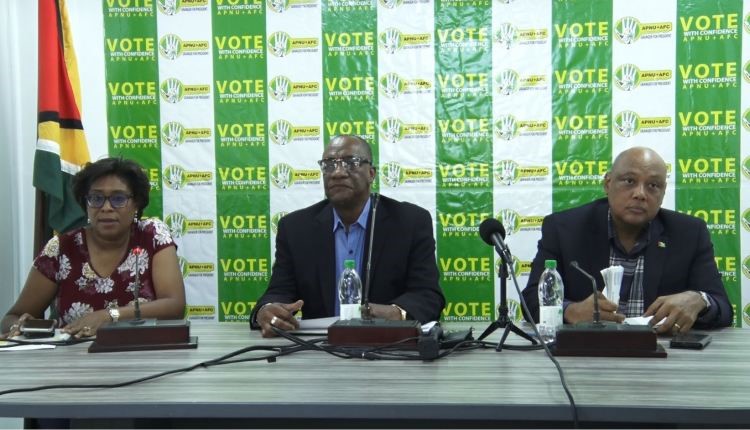 Despite several concerns raised about the tabulation of votes in Region Four, which puts the APNU+AFC Coalition in the lead, the leadership is satisfied with the elections process.

At a press conference on Saturday at the Coalition’s campaign headquarters on Lamaha Street, Georgetown, campaign managers Joseph Harmon and Raphael Trotman said they are pleased with the process thus far.

“We like all of us who participated on elections day are generally satisfied with the process,” Trotman told the media.

“Overall I believe GECOM, given the constraints it operated under, was able to do a relatively good job…we await the final declaration,” Trotman told the news conference.

The results for Region Four were declared by the Returning Officer for the district, Clairmont Mingo on Friday night amidst protest of discrepancies from political parties and others present at the Guyana Elections Commission’s (GECOM) Kingston, Georgetown office.

The tabulation was disputed by the ten other political parties which contested the March 2 polls along with local and international elections observer missions.

In response to this, Harmon said the observers are in Guyana at the invitation of the Government and will be making recommendations in their final report which will be taken into consideration for the next elections.

“Irrespective of how they saw it, what we did was welcome them and I welcome their reports because in large measure, their recommendations are reports which are being made…as far as the APNU+AFC is concerned, we respect the work of the missions because they are part of the electoral framework in this country,” Harmon.

The International observers were joined by western countries who raised serious concerns about the Region Four tabulation process. The Organisation of American States (OAS) electoral observer mission has since left Guyana over those concerns.

The issues plaguing the Region Four vote count dates back to March 4 when the RO began to use a spreadsheet with numbers different from those on the Statements of Poll. He declared those results on the evening of March 5 which was on Wednesday last declared null and void by the Chief Justice Roxane George in a case filed by a private citizen challenging the process.

In that declaration, it was revealed that the Coalition received 136,458 votes at the general level and 136,335 at the Region level but these figures are not the same that was declared on March 13.

This was brought to Harmon’s attention on Saturday morning but he maintained that the APNU+AFC is confident in the electoral process.

He reiterated the Coalition’s Leader sentiments that the Government has no say in the electoral process of GECOM.

“We have clean hands in this matter and therefore we challenge anyone to show we have been involved in anything other than running a campaign,” Harmon said.

“We are very confident in the figures…” he added.

Western countries have threatened sanctions against Guyana if a President is sworn in using results from the flawed process.

“Any country must be concerned about the threat of sanctions,” Harmon said but expressed his belief that with the support of citizens, the Coalition can work to restore confidence in the administration.

Meanwhile, the coalition has since distanced itself from the opinion expressed by Dominic Gaskin, an AFC executive member, a Government official and son-in-law of President David Granger, that the electoral process was flawed.

Trotman who is also the Chairman of the AFC said, “he has his own views. An overwhelming majority of APNU+AFC membership does not share that view.