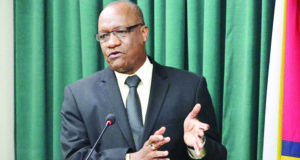 EXTENDING an ‘olive branch’ to the opposition and stakeholders that are key to the electoral process, the ruling A Partnership for National Unity + Alliance For Change (APNU+AFC) Coalition said it is open to dialogue on a possible solution that would bring an end to the protracted electoral process.
Though it has been close to five months since General and Regional Elections were held in Guyana, the official results have not been declared by the Guyana Elections Commission (GECOM), due to a series of legal challengess filed at all three tiers of the country’s judicial system – the most recent challenging an Order (Order No. 60), which triggered a national recount.

On Wednesday, APNU+AFC Chief Spokesperson, Joseph Harmon, in a public address, said: “The APNU+AFC Coalition, in the national interest, and with a view to maintaining stability and peace, remains open to dialogue with other political parties and stakeholders on the way forward for our country. The APNU+AFC Coalition is prepared to act responsibly to bring a resolution to the ongoing political situation.”

Declarations made by the returning officers in the 10 electoral districts, as compiled by the Chief Elections Officer Keith Lowenfield in his election reports, showed a win for the APNU+AFC; however, when a national recount was conducted in accordance with Order No. 60, the figures showed a win for the People’s Progressive Party/Civic (PPP/C), but the process also unearthed massive irregularities and cases of voter impersonation. To date, there remains a ‘legal’ tug of war on whether the elections commission should rely on the March declarations or the data generated by the national recount to declare the results of the elections.

On Monday (July 20), the High Court, in the Misenga Jones Case, upheld the national recount and simultaneously set aside the March declarations. The Chief Justice (ag), Roxane George-Wiltshire, relying on the judgment of the Caribbean Court of Justice (CCJ), ruled that issues regarding irregularities during the electoral process must come via an elections petition in accordance with Article 163 of the Constitution, which gives the High Court exclusive jurisdiction to adjudicate over such matters. According to the National Assembly (Validity of Elections) Act, election petitions must be filed within 28 days of the declaration of the results of an election. But dissatisfied with the ruling, Jones, a Tucville Georgetown voter, has turned to the Court of Appeal for relief on the grounds that the recount created a new electoral regime in breach of the Constitution and Representation of the People Act, and cannot be used for a declaration of the results of the March 2 elections. She is adamant that the March declarations must be used.

In his address, Harmon admitted that repeated resort to the courts have prolonged the electoral process.
“Delays in the declaration of results were caused, in part, by several appeals which were made during this period – to the Supreme Court of Judicature, the Court of Appeal of Guyana and the Caribbean Court of Justice – to provide interpretations of electoral and other laws and to resolve problems arising from the elections,” the APNU+AFC Campaign Manager said, while noting that the people of Guyana are awaiting a “credible” declaration by the elections commission headed by Justice (Ret’d) Claudette Singh.

Noting that the coalition remains committed to a “lawful and credible declaration of results based on valid votes,” Harmon said the APNU+AFC has taken note of the chief justice’s ruling.

“The APNU+AFC Coalition, as always, remains committed to the judicial process. That process is incomplete as it stands and the matter has been appealed in the Guyana Court of Appeal. Such an appeal is lawful, proper and guaranteed under the Constitution of the Cooperative Republic of Guyana, our supreme law,” he said, while iterating that the APNU+AFC will await the outcome of the appeal.

While the CCJ, in invalidating the second of three elections reports compiled by the chief elections officer, ruled that the irregularities and allegations of voter impersonation cannot be addressed at this stage of the electoral process, the APNU+AFC is resolute in its position that “fraudulent votes” cannot be factored in to represent the will of the electorate.

Any attempt to include fraudulent votes in a ‘declaration’ will constitute a violation of the constitution and the fundamental principles of democracy. We maintain that the elections commission can only make a ‘declaration’ based on valid votes,” Harmon said.

He added: “The recount process which was conducted, painstakingly, for 33 days revealed massive irregularities and extensive fraud which cannot be foisted on the Guyanese people to contrive an outcome that betrays the will of the electorate.”

In an attempt to determine a final, credible count as dictated by Order No. 60, the chief elections officer had excluded some 115,000 from his June 23 elections report, in accordance with a decision of the Court of Appeal that a President could only be elected on the basis of “valid votes.” But the CCJ, in overturning the decision of the Court of Appeal, invalidated the report of the chief elections officer.

“By the unnecessary insertion, into Article 177 (2) (b), of the word “valid”, the Court of Appeal impliedly invited the CEO to engage, unilaterally, in a further and unlawful validation exercise trespassed on the exclusive jurisdiction of the High Court established by Article 163. It was inconsistent with the constitutional framework for the CEO or GECOM to disenfranchise tens of thousands of electors in a seemingly nontransparent and arbitrary manner without the due processes established in Article 163 and the National Assembly (Validity of Elections) Act,” the CCJ President Justice Adrian Saunders ruled.

The CCJ’s decision had placed the electoral process back into the hands of the Elections Commission but another controversy erupted over the interpretation of the CCJ’s ruling and how it ought to be implemented. While the High Court has said that the CCJ endorsed the national recount, others, including the chief elections officer and Attorney General Basil Williams have pointed out that in the ruling of the apex court, it was said the results of the elections could only be declared using information supplied to the elections commission by returning officers in accordance with the Representation of the People Act. The returning officers did not participate in the national recount.

This contention along with the constitutionality of the Recount Order and Section 22 of the Elections Law (Amendment) Act forms a major part of the Misenga Jones case that will be heard in the Court of Appeal on Saturday.

In the interim, the APNU+AFC is imploring all Guyanese to remain calm and peaceful as the country awaits a credible and legitimate outcome.