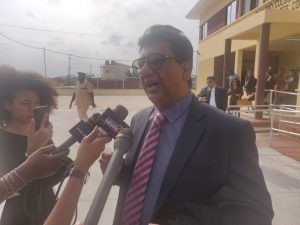 The rigging cabal within the APNU/AFC is doing everything possible to resist the recount and to undermine President David Granger’s commitment to the Caricom-led initiative to recount all the ballots cast at the March 2 2020 Elections.

This was according to executive member of the People’s Progressive Party (PPP), Anil Nandlall, who contended that the public is fully aware of the delay tactics employed on Monday to frustrate the commencement of the recount and their further attempts at using the police to prevent the political parties from monitoring the ballot boxes at the Arthur Chung Conference Centre.

“I am now reliably informed that their next resort is to the High Court. They plan to use an ordinary citizen to file proceedings, seeking orders of court directing the Chief Elections Officer to accept the illegal declarations made by Mingo of Region Four results and to tabulate the final results and present same to the Commission and obtain further orders directing the Commission to declare the perverse final results,” Nandlall stated.
He further related that the move is obviously being executed to undermine the Caricom initiative.

“While such legal recourse will not succeed for reasons I will withhold at this point in time, it will certainly expose both Mingo and Justice Claudette Singh to Contempt of Court. The Contempt case against Mingo is already filed and pending. It will now have to [be] tried. The Chairperson has repeatedly admitted that she gave an undertaking to the Chief Justice that there will be a recount of Region Four ballots.”

He posited that an undertaking is as good as an order of the court and a violation of the same constitutes Contempt of Court while noting that President Granger will disregard these legal proceedings as a pretext for his usual deniability.
“This farce, like so many that they have tried, will not succeed.”