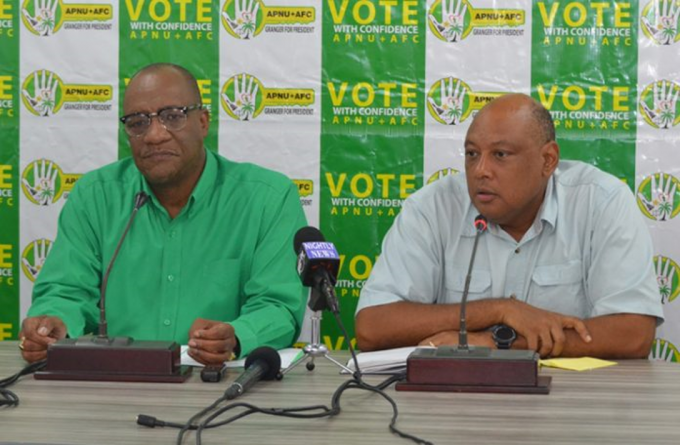 The APNU+AFC Coalition has strongly condemned what it described as the reckless and irresponsible statement issued by the opposition People’s Progressive Party on Monday evening, claiming that moves are afoot to destroy State records.

“The statement is based on absolute falsehoods and manufactured information, and is clearly designed to excite and incite the public. It is evident that this statement is a manifestation of the throes of desperation that the PPP has found itself in, as the results of Monday’s General and Regional Elections are becoming clearer to those at Freedom House,” the ‘Coalition’ said.

In a release issued on Tuesday afternoon, the PPP called on the Commissioner of Police to take all necessary steps to protect all public buildings which house government offices, including, but not limited to, all Ministries of the Government. “We have received credible information that attempts are being made to remove and destroy important records of the Government of Guyana, and other public documents and moveable assets of the State,” the PPP said in its release, adding: “We expect the Guyana Police Force to discharge its statutory duty in protecting and preserving official records of the Government of Guyana, and all Government and State properties.”

However, the APNU+AFC Coalition is calling on the public to continue to exercise patience “as we await the official announcement of the results by the Guyana Elections Commission. We also repeat our call for citizens to remain calm, and go about their business in an atmosphere of peace and optimism. The APNU+AFC Coalition is confident that it will be returned to government for a second term to continue the work of building and developing Guyana,” the statement added. According to the ‘Coalition’, the Elections Commission is doing a methodical job, and has started to release the figures of the polls.

“We have every confidence in GECOM in the administration of this election, and our internal figures, which we are comparing with the GECOM-delivered results, show an unmistakable trend towards an APNU+AFC victory,” the ‘Coalition’ said in its statement. “We are aware that some, if not most, of the international observer missions, will be leaving Guyana shortly, and we wish to take this opportunity to thank them and the local missions for their work in Guyana over the election period. Democracy is alive and well in Guyana,” it added.

In closing, the ‘Coalition’ said, “We wish to commend the Guyana Police Force for the professional job which they have done so far and urge all citizens to be respectful in their interaction with our security forces. As we did earlier today, we commend all Guyanese for their patience, and urge that this continues as we move forward together.”