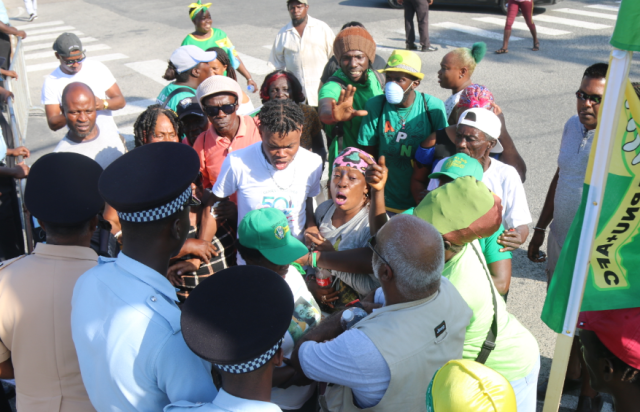 A Partnership for National Unity + Alliance For Change (APNU+AFC) hosted a press conference early yesterday, following a contentious late night declaration of the results for the District Four vote count.
During that declaration, supporters of the party surrounded the Guyana Elections Commission (GECOM) headquarters and hassled members of the media who tried to enter.

Joseph Harmon, General Secretary of APNU claimed that he was unaware of any attacks on the media, even though the Guyana Press Association (GPA) has made several statements condemning such.
Kaieteur News pointed out to Harmon that a representative of the Coalition at the GECOM centre was actively communicating with the crowd, and that a claim of ignorance is not likely to be believed.

Harmon, when asked, said that he does expect the media to accept his claim of ignorance because, “There is not everything that the media knows. There is not everything that any individual knows.”
Furthermore, he said “You cannot pin that [what happened] on a crowd… [or] on a particular person.”
Harmon said that in any case, if attacks do happen, the party condemns and does not condone the behaviour.

“We will not encourage our supporters to manhandle, to deal with the media in an aggressive way. And we trust that this goes out to all across the country.”
He said that sometimes people tend to pin certain things on the APNU+AFC but that he is making a general statement that attacks should not happen.

Kaieteur News reporters were victims of such attacks, while attempting to gain access to the GECOM headquarters on Friday evening.
Earlier in the day, Coalition supporters had surrounded the police barricades, heckling and booing observers and other officials who attempted to pass through.

While senior police ranks were stationed there, these ranks did nothing to quell the large crowd.
Later in the evening, media operatives were informed by GECOM that the Returning Officer was scheduled to make his declaration. They were told that police would be stationed there to allow easy access through the barricades, since this was difficult before.

When the reporters returned to the barricades at High and Cowan Streets, Kingston location, they were immediately blocked by the APNU/AFC supporters who surrounded them and demanded to know why they were there.
One supporter was heard screaming, “Who is y’all? We ain’t want no media here! Get out! Y’all move from hay! Guh back wheh y’all come from! We ain’t want y’all hay,” the supporters screamed.

The reporters were forced to abandon their intended task and leave the area, fearing for their safety.
Several complaints were made regarding the treatment and safety of local journalists providing coverage for the Regional and General Elections, but these fell on deaf ears.