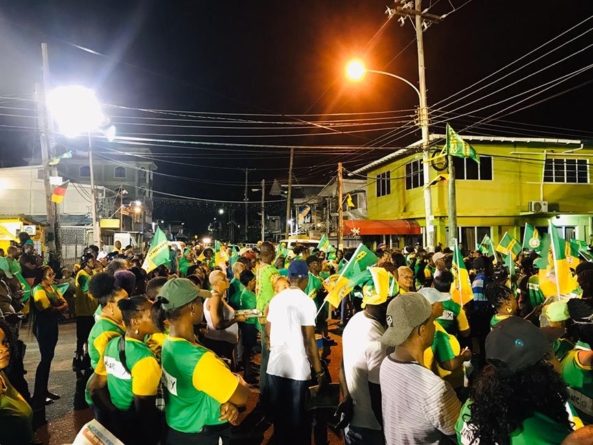 A Partnership For National Unity/Alliance For Change (APNU/AFC) held a public meeting with supporters in the Kitty Market Square, Georgetown, on Sunday evening where they urged supporters to give them another chance despite the admittance of unfulfilled manifesto promises.

Addressing the gathering, Public Health Minister Volda Lawrence admitted that there is still much to be done on the part of the Government. As she told the gathering of coalition supporters, however, “Rome wasn’t built in a day”.
Lawrence urged persons to go on and vote on Elections Day – March 2. According to her, it was important that persons not only check to ensure their names are on the list; persons must also know how to vote on Election Day.
“I don’t want all them spoil votes like the last time. Remember, you have to vote once! We have to ensure that we bring everyone out to vote,” Lawrence stressed, adding also that scrutineers must also be vigilant.

Meanwhile, AFC member and APNU/AFC candidate Nicola Trotman also acknowledged that there is much left to be done. She noted in her address that the Government did make certain promises that were not followed through.
“The coalition Government made promises. Not all of them bore fruit. But we beg you to have tolerance with us. However, we have given you a better life. We have increased public servants’ salary…and old age pension to $20,000. So you got a better life!” she stressed.

Meanwhile, Minister Lawrence, in introducing the final speaker alluded to a “young” Minister. In fact, she was introducing Communities Minister Ronald Bulkan, who, in taking the stage, encouraged supporters to vote for Government based on the promises they did keep.
“We ensured that Local Government Elections were held, in keeping with our promise. Local Government Elections were held for the second time in 2018. What does this do? It ensures that people, wherever they live, have the right to elect candidates within their own areas who would have responsibility to manage and develop their communities.”

Promises
A broken promise of APNU/AFC that was alluded to by the People’s Progressive Party (PPP) only Saturday in Anna Regina was a promise to establish a rice stabilisation fund. The establishment of a rice stabilisation fund would ensure that farmers are protected from price swings on a volatile global market.
Back in 2016 during an address to Parliament, President David Granger himself made a commitment to have it established. Fast forward to 2020 and it is one of several promises that the PPP has highlighted remain unfulfilled, alongside the promise to put systems in place to allow farmers to earn $9000 per bag of paddy.

Another promise was to provide jobs. However, the PPP has consistently taken the Government to task for doing the exact opposite, pointing to the thousands of sugar workers that have been dismissed in the sugar belt as the Government sought to downsize sugar by shutting estates against the advice of its own inquiry.
Other promises include providing housing and eradicating blackouts. Blackouts remain a distressing issue for certain parts of the country, while the distribution of house lots has reduced significantly since the change of a in 2015 despite the fact that the demand has not decreased.

This is evident in the 2017 Annual Report of the Central Housing and Planning Authority (CH&PA) which was recently laid in the National Assembly. The report shows that a total of only 1131 house lots were allocated in that year for qualified applicants.
This does not compare favourably with the previous year, which, according to the report, 2020 house lots were allocated in 2016, an improvement on its original target of 1100. This includes 625 low to moderate-income house lots and 1395 middle to high-income house lots.

But both of these years’ figures pale in comparison to the number of house lots distributed in previous years under the former People’s Progressive Party (PPP) Administration. In the CH&PA’s 2013 Annual Report, its programme performance assessment had indicated that 4417 house lots were allocated, just shy of the 5900 target.