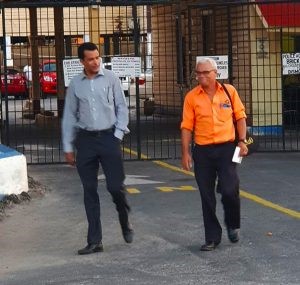 Heightened tensions shifted to the Guyana Elections Commission (GECOM) Headquarters at Kingston yesterday after the representatives of two parties clashed, resulting in an arrest.

The entire ordeal captured on camera put a temporary halt on the already delayed results for district four.
In the video seen by Kaieteur News, A New and United Guyana (ANUG) candidate, Jonathan Yearwood was heard screaming at the Returning Officer, Clairmont Mingo “You are wrong! You are wrong! Your reputation will go down in tatters in this country! Your reputation, Mr. Mingo. Your reputation…You fail to understand what is going to happen to this country.”
This was followed by Yearwood getting up and stating while walking away that he would “take no further part in this fiasco” – pointing his finger in Mingo’s direction.

At that time, A Partnership For National Unity + Alliance For Change (APNU/AFC) representative, Carol Joseph got up and aggressively approached Yearwood, demanding that he desist from shouting at the Returning Officer.
Yearwood turned his attention to Joseph and shouted loudly, “shut up!” The two had to be separated by law enforcement officers, who then arrested Yearwood.

He was later released from police custody.