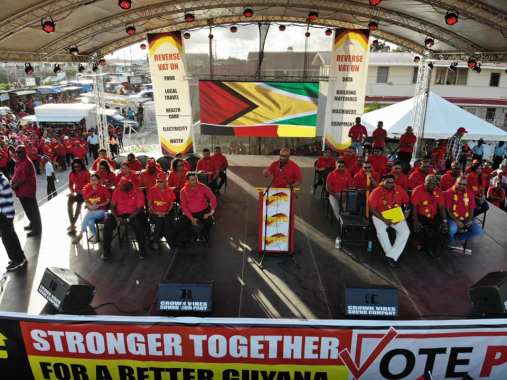 In light of the A Partnership for National Unity/Alliance For Change (APNU/AFC) paltry track record in upholding democracy and the Constitution of Guyana, People’s Progressive Party (PPP) leaders seemingly touched a chord with supporters in Region Two.

During a campaign rally in Anna Regina, Essequibo Coast, Region Two (Pomeroon-Supenaam), on Saturday, PPP General Secretary Bharrat Jagdeo hyped the large crowd as he laid bare APNU/AFC’s constitutional transgressions. He pointed to the party’s fight in the courts of law and beyond, to get the Government to call elections – without the support of other, small political parties.

“I see all these small parties. You have a ton of them who’ll be on the ballot paper. You didn’t see them when the battle was there and we had to fight a long, hard battle against APNU/AFC or it would have been worse now. We would have lost more than 30,000 jobs,” Jagdeo told the large gathering.

“We fought them in Parliament, protested against them. Imagine when they put the VAT in education, it was our fight we led that got them to remove the VAT. When they increased the tributors tax and increased the 2 per cent final tax for the miners, it’s the PPP that led the fight.”

Referring to the coalition Government’s firing of thousands of Amerindian Community Service Officers (CSOs), Jagdeo pointed out that it was the PPP that wrote the United Nations (UN) seeking help.

Jagdeo noted that with the mismanagement of the economy and various sectors, the party knew the day would come when persons would get a chance to vote according to their conscience. He said that the Government has shown an inability to manage the macro-economy… something even oil will not fix.

“We knew this day would come. We’re not fair-weather friends. Immediately after the Government changed, we came on to the Essequibo Coast visiting. We’ve been talking to people. We knew the day would come when we save our country, not just for PPP people but everybody.

“So much is at stake. We [could] give this Government US$10 billion of oil money and we’d still be worse off than Venezuela… they were exporting 3 million barrels daily. We’re going to produce 120,000 barrels a day and they don’t have food.”

Meanwhile, PPP candidate and former Minister of Culture, Youth and Sport, Dr Frank Anthony also cited the Government’s track record in his address to PPP supporters. According to Anthony, the Government has failed in almost every sector.

“You know what is at stake because you have been living it. You have been experiencing it. You have seen your income go down. While prices have gone up. It’s harder to pay loans, mortgages, electricity and water. It is even harder to send your children to school,” Anthony said in his speech.

“Farmers, the hands that feed this nation now have a difficulty feeding their family. Drainage and irrigation charges are the highest it has ever been. Land rent has shot up. And adding VAT to agriculture equipment is one of the disastrous policies that have helped cripple this once prosperous rice industry. Judge them! Judge them by their promises. They told you $9000 per bag of paddy. How much are you getting now?”

In addition to this, Anthony returned to many of the promises made by the APNU/AFC Government on the campaign trail. According to the medical doctor, the coalition failed to fulfil many of them.

“They promised police, nurses, teachers a good life. Did they get a good life? No! How do you grade them? Failed! On every single subject, they failed. Do you want another five years of failure and broken promises?” he questioned, to which the crowd responded with a resounding no.