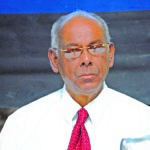 Regardless of which senior police officer instructed Assistant Police Commissioner (APC) Edgar Thomas to remove the local and international observers along with accredited individuals from the Guyana Elections Commission (GECOM) command centre, it would have been unlawful for him to do so.

This is according to prominent Attorney-at-Law and former Speaker of the House, Ralph Ramkarran, who on Saturday told GuyanaTimes that the only authorised person that could have given that order was GECOM’s Returning Officer, Clairmont Mingo.

He explained that according to the Representation of the People Act, Section 84 (1), it is the Returning Officer who has the authority to have persons present during the period of tabulating and verifying of votes.
“Certain people are statutorily required to be present like the counting agents of the parties and so on but the Returning Officer has the discretion to allow anyone else who in his opinion ought to be present.

Only a few days ago, APC Thomas, was removed from his Commanding Officer post for Region Four (Demerara-Mahaica) Sub-division A with immediate effect after he reportedly refused to execute an order from one of his superiors.
A source close to the Commander said that on Thursday night, an order was given by a Deputy Commissioner of Police to remove both international and local observers along with GECOM People’s Progressive Party/Civic (PPP/C) appointed Commissioner from the Region Four Returning Officer’s (RO) office at Hadfield and High Streets, Georgetown.

According to a source in the top brass of the Guyana Police Force (GPF), after the instruction was handed down, the Commander related that such a move would be unlawful while pointing out that to execute such an order would also escalate the already high tension at the location.

“Thomas and at least one Deputy Police Commissioner discussed whether it was legal for him to do that and he stated to his superiors that in his opinion and in the level of professionalism, he didn’t have the authority to remove them. He did communicate it to his seniors but the order was given for him to be permanently removed as Commander immediately after he expressed his opinion,” the source said.

Further, this publication was told that after the APC assessed the situation on the ground on Thursday night, he opined that the persons should not have been removed and made a “judgement call” not to carry out the order.
“The order was that they be removed immediately without observing and ensuring the integrity of the documents there. He made the right choice to ensure democracy and transparency and also he felt, in all his years of experience, that it would have been unlawful at that point,” the source added.

Following APC Thomas’ refusal to carry out the orders, a rank junior to him was sent to clear the building, while he was relieved of his duties as Commander.
Just months ago, APC Thomas was placed in the Division after Assistant Commissioner of Police Marlon Chapman went into retirement. He was promoted to that position based on his exemplar and stellar performance in the GPF over the years.