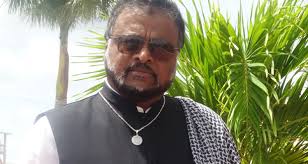 Dear President David Granger,
As you are aware, I have always had the greatest form of respect for you and your Government since 2015 and forever in my life, past and present. However, I always stand for what is right and good for my God, country and fellow humans.
We all know this is a time of great pain and distress. Guyana, Mr President, as we all know, is in a time of upheaval and psychological warfare which could very well turn out to be riotous and could create a mindset in our people of ethnic strife and party loyalty warfare.

Guyana is set for greatness as we all know (despite the setback in oil prices) through our discovery of oil, minerals, agriculture and possibly rare earth discoveries. You, as President, need to ensure that Guyana does not go into a state of civil unrest and war. You, sire need to ensure that sanctions are not levied on our country. We know of countries where sanctions have been unleashed and this has had devastating effects on the lives of citizens, the economy and international degradation where the nation becomes like a pariah state. States where people are being looked down upon as children of a lesser God, as we have seen with the Venezuelans.

I wish to paint a clearer picture as to how countries with international sanctions have suffered. Take Iran for example, in 2010 the United States passed the Comprehensive Iran Sanctions, Accountability, and Divestment Act. It revoked, for example, permission to import “certain foodstuffs and carpets of Iranian origin,” the US Treasury says. Those who violated the law could face a fine of up to $1 million and 20 years’ imprisonment.

The law established that Iranian goods or services may not be imported unless they are gifts valued $100 or less; informational materials, or personal property of someone coming into the United States.  In 2011, the United States added further sanctions, including tightening restrictions on companies that provide Iran with equipment and expertise to run its oil and chemical industry. It prohibited groups that do business with financial institutions in Iran from holding accounts in the United States.
EU sanctions:

The European Union announced Monday it will ban the import of Iranian crude oil and petroleum products. Assets of Iran’s central bank in the European Union will be frozen, and trade with Iran in gold, diamonds, and precious metals will be blocked, the Union said.

“Every single day, as soon as people open their eyes, they face a dark and vague future,” wrote Iranian musician Mehdi Rajabian. Mr President, is this the future you see for your people? I hope not.
What sanctions are already in place on Syria?

The EU, Syria’s biggest trading partner, has imposed travel bans and asset freezes on more than 120 individuals and 40 companies. These include President Assad and most of his close family, the Syrian Central Bank and senior officials, including seven Ministers.

In 2013, the EU banned crude oil imports from Syria and in February it expanded sanctions to block trade in gold, precious metals and diamonds with Syrian public bodies and the central bank. President Granger, do you see how easily our natural resources industry with so much promise could crumble? Are you prepared for this?

The bottom line is, military action isn’t the only option for countries that are in the midst of a political dispute. Instead, economic sanctions provide an immediate way for the US to crack down on rogue countries without putting lives on the line.

It was estimated that if sanctions were to be levied against this great nation economically we will regress forty years and we don’t need this for our country. I also would not like for you, Mr Granger, as a gentleman and a scholar, to be sanctioned or for any member of Parliament to be sanctioned. Thus, I implore you to use whatever persuasive skills and authority you may possess to weigh in on the situation at GECOM to ensure that we have a proper count/recount of votes and so we can sway the minds of the observers and the world at large to once again see Guyana in a positive light.