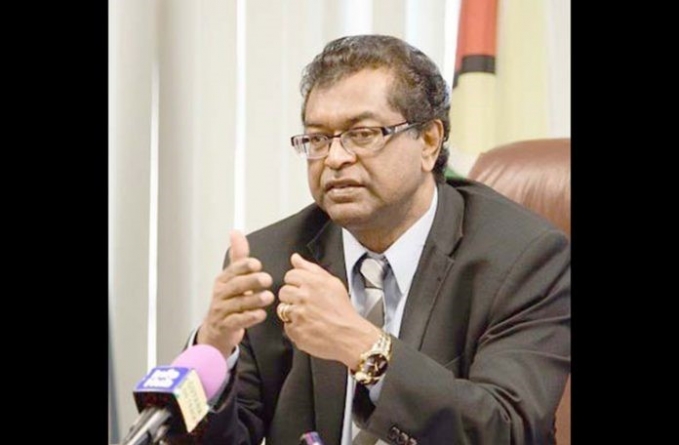 PRIME Ministerial Candidate of the APNU+AFC and Minister of Public Security Khemraj Ramjattan has stated that it would be “totally misguided” and contrary to the Constitution and other binding agreements for the Caribbean Court of Justice (CCJ) to rule that it has jurisdiction to hear the elections matter currently before it.

On Sunday, the minister expressed his Party’s position on the matter in relation to the Eslyn David V Chief Elections Office et al case, while a guest on 104.3 Power FM radio. He said that while lawyers representing the People’s Progressive Party/Civic (PPP/C) have argued that it is the Court of Appeal’s jurisdiction to rule on the said matter that they question, and not the jurisdiction of the CCJ, Article 177 (4) of the Constitution not only places the ruling on such matters into the remit of the Court of Appeal, but limits the CCJ’s jurisdiction to rule on the said matter subsequently.

According to Article 177 (4) of the Constitution: “The Court of Appeal shall have exclusive jurisdiction to hear and determine any question as to the validity of an election of a President in so far as the question depends upon the qualification of any person for election or the interpretation of this Constitution; and any decision of that Court under this paragraph shall be final.”

Ramjattan said that it would be very difficult, and will take “some magic” for the CCJ to conclude that it has jurisdiction to upturn the Appellate Court’s ruling, or that the Appeal Court had no jurisdiction in its ruling. “When we signed on to the Treaty that made the Caribbean Court of Justice come into existence, we signed on there with that exclusivity in determining the presidency; that the Court of Appeal will be the authority and will be the final authority,” he said. “So, in view of the explicit provisions of all these laws: the Constitution, the Treaty and the municipal law that created the CCJ, it is very unlikely. It will be most misguided of a Court…to say that it has jurisdiction. This is an ouster clause in law; it outs the jurisdiction, and it will be like threading through a needle’s eye a camel rather than a thread to come to a conclusion that they have jurisdiction. It would be totally misguided.”

Furthermore, the APNU+AFC Prime Ministerial Candidate reminded the public that it was Opposition Leader Bharrat Jagdeo who, while President of Guyana, assented to the municipal law and the treaty establishing that the CCJ doesn’t have jurisdiction on such matters. Ramjattan said: “The CCJ, I believe, will be out of place, and it will be heavily criticised and also have huge repercussions all across the Caribbean, because a number of countries have not signed on to the Caribbean Court of Justice [Appellate functions] simply because they feel that it can sometimes overreach and go beyond places that it’s supposed to go.”

He said that if there is a will for the Court to have jurisdiction on such matters in Guyana, Guyana would have to amend Article 177 (4) of the Constitution to give the CCJ that right, which is something only elected officials must do, and not through an interpretation of the Court. “We have to let the Caribbean people know that this must not come by judicial legislation; this must come by an amendment to our Constitution by the elected officials. I think two-thirds is required by Parliament,” he said. Despite whichever member of the international community has lent its voice to Guyana’s affairs, Ramjattan reminded that it is not their position that will determine the outcome of Guyana’s elections. “They can make their statements, but the ultimate authority is an independent constitutional body called GECOM. They are the final authority, after being guided by the Courts as to how you’ll interpret the law and how you apply it, they will be the final authority,” he reminded.

During his remarks, Ramjattan encouraged all Guyanese to practise restraint as they await the decision of the CCJ, and acknowledged that while it has been a long wait, precious time has been spent on ensuring that a legal declaration is made on the elections. “I feel that they do not have jurisdiction, and that is the feeling of a number of lawyers in and across the Caribbean; even the lawyers in the case,” he said, adding: “So, it is important, then, that we, as our President has indicated, make sure that we await all these guidance that we will get from the very important Courts of law; patience is what is required, and we are going to await this final phase of a declaration… I do not want, as Public Security Minister, that we get misguided, and all manner of things start happening in our country, and then we go back into a time when we found disfavour in that kind of action.”

He stressed that despite the political challenges of the day, as a nation of six peoples, Guyanese must learn to live in harmony, away from negative practices such as racism and division. The Minister said: “I ultimately believe that we are going to get the declarations in our favour, but even if for a miracle that does not happen, we have to live by the declarations of the GECOM Chairperson and, to that extent, we must be united forever in this country.” He said that Guyana’s massive oil wealth will no doubt increase the development of the nation, but the APNU+AFC has fought over the last five years since the discovery to ensure that the best managers are put in charge of the country’s resources. Ramjattan said that it is evident that the PPP/C was involved in massive corruption during its tenure in office, and the APNU+AFC wants to remove that scourge from Guyana, and place it on better footing.