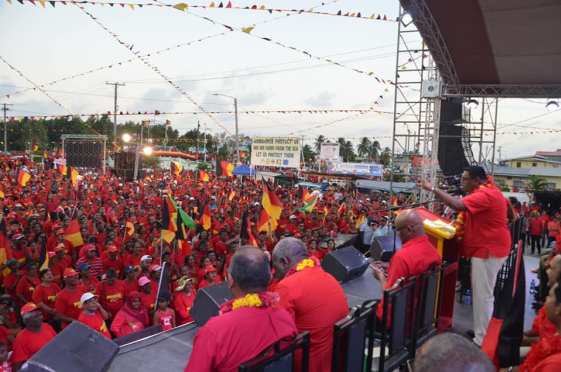 People’s Progressive Party/Civic (PPP/C) presidential candidate Irfaan Ali yesterday declared that the policies outlined in his party’s manifesto were conceptualised to take Guyana into the future and he highlighted plans to fight crime.

At a rally at Damon Square, Anna Regina, Region Two, Ali shared the party’s plans to thousands of supporters as he appealed for votes to return the PPP/C to power at the March 2 general and regional elections. Much of the promises he spoke about were made in previous manifestos and were about issues that the PPP/C failed to address while in government from 1992 to 2015.

“…We built this country and we did it without oil and gas. [We] lead by vision, commitment, ideas and understanding of what is good for Guyana and that comes from listening to you and understanding your needs. The future we talk about is the future for every single Guyanese. Our message is one that is just and one that puts Guyana first,” a fired-up Ali, who is facing 19 criminal fraud charges, told the crowd.

According to him, during the 23 years of his party’s governance, they were able to bring the country from the dismal state it was in during the 28 years rule of the PNC and transform all sectors of Guyana and improve the lives of Guyanese. He said that the country has seen dramatic changes from 1992, a time when the country was significantly indebted.

The PPP/C’s presidential candidate, who delivered a nearly hour-long address to the gathering, added that under their manifesto, they will tackle crime in every part of Guyana in order to build safer communities. He echoed plans previously announced by his prime ministerial candidate, Mark Phillips.

“We must take the responsibility of building a system that will ensure safer communities, a system that would ensure what you work and acquire, you are able to enjoy peacefully. A system that has a balance, that balance to ensure our men and women are properly taken care off,” he said.

“The system must give its best, but also we must ensure that system itself will hold the men and women in uniform must give their best and be held accountable for stewardship,” he added.

Further, he said, such a system must provide for better infrastructure, equipment for the force and better salaries while at the same time delivering results. 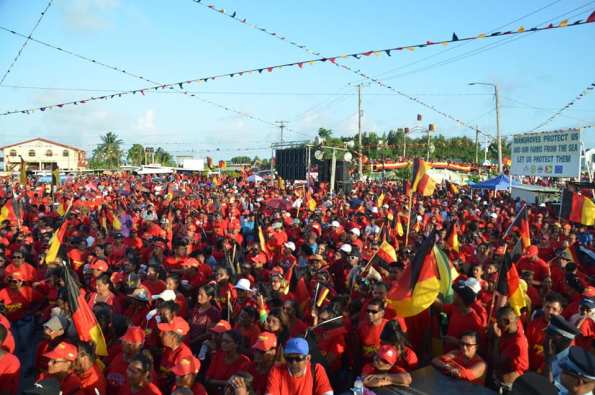 Crime fighting must be advanced, Ali said, as he explained that crime cannot be dealt with in an ad hoc manner. He stated that advanced systems must be put in place to ensure that fisherfolk, who are exposed to the risk of piracy, can have the assurance that they would return home.

He further stated that a crime fighting system is built to identify and proactively respond to threats.

“We have to ensure that we build a system that will tackle crimes because while investors are looking at Guyana as a destination to invest, the sophisticated criminal is also looking at the opportunities… An advanced system must be built on a platform that examines and responds to the present situation and be able to react and respond proactively to that threat,” Ali stressed.

Community involvement must also be a part of the crime-fighting strategy, which would allow for the development of an intelligence gathering approach, he said.

Ali added that there must also be partnerships between private security firms and the nation’s security forces, which he said will improve the security of the nation.

Ali further stated that should his party be elected on March 2, his government will invest heavily in the Information Communications Technology (ICT) sector. He said that such investment would enable almost every family in the country to have internet connectivity and will pave the way for the creation of advanced educational opportunities.

“We will commit and build our country; that is what we will be doing in this modern world. Students will no longer require to travel. The investment in ICT [means you can pursue] your University of Guyana degrees right here in your homes. This is the future we are talking about with more money back in your pockets and we will not stop until every child have access to proper secondary education,” Ali said.

According to him, ICT would be utilised to deliver on his party’s promise of 20,000 scholarships to Guyanese.

Ali added that the world is transitioning and so must every Guyanese. “Everything is becoming smarter. We have to find a way, regardless of level of income, to allow the people to have access to smart device and technology. We cannot have a technological gap in the nation,” he posited.

Touching on a crucial issue for Essequi-bians, the lack of reliable electricity, Ali said that they will work to end power outages and within the first five years, his government will would continuously invest in generating 400 megawatts from new power sources. On this note, he restated that they will work to revive the shelved Amaila Falls Hydropower project.

Prior to departing office in 2015, the PPP/C had spent hundreds of millions on the access road to the project site. The project was shelved after the APNU+AFC coalition government took office.

Ali said that the cost of power has been too burdensome on the average Guyanese and on the business sector.

Turning his attention to farmers, the PPP/C presidential candidate declared that incentives will be returned to them. He said that rice production is very important to the economy and should they be victorious at the March 2 polls, they are going to remove the charges on drainage and irrigation services.

“We are going to give you back help like fertilisers and we are not only going to work on new markets but look at viable and sustainable markets. We have to ensure we create an enabling environment to make rice profitable. Removing the taxes, capital cost would come down giving you more in your pockets. There is a plan to make rice profitable,” Ali declared to loud cheers.

The presidential hopeful highlighted that they will also seek technical advice on the establishment of a rice stabilisation fund, which, he said, would help farmers. He also touted plans of opening up new farmlands for young farmers.

According to Ali, they have plans that would support the agro-processing and aqua-culture industries by offering the training and machinery necessary to advance those sectors.

He also said that his government will create a world class tourism and hospitality complex and a biodiversity complex that would improve the skills of people in the sector.

He noted further that a platform would be created to cater to all aspects of the oil and gas industry and persons would be trained for the industry.

Ali said that the PPP/C would improve the health sector and work to solve issues such as drug shortages at local health facilities. He added that they would work to have specialty healthcare available at every regional health care facility.

“When we have economic transformation and creation of wealth, we must take care of the people. This is the time of transformation…The future is to transform lives. We must do so by investing in human resources…” Ali added.

The presidential hopeful said, “We have to ensure we build this future together. We build this future that we will live a better life. We ain’t talking about good lie… this is the people’s business, this is not the big belly and small belly this is about you and the life you deserve…”

Meanwhile, Phillips underscored that “victory is in sight.”

Phillips criticised the David Granger-led administration on their failures of the past four years.

“We are living a burden after four years. They have placed on us increased taxes; everybody is hurting to put food and send children to school,” he said, claiming that the administration failed to delivered on the good life promised.

Phillips said that while his party would focus on all aspects of improving Guyanese lives, special focus would be given to crime and security.