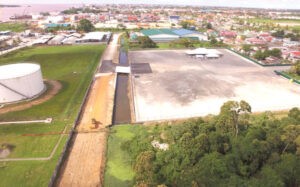 Residents living around the environs of Agricola, East Bank Demerara are objecting to the planned construction of a ‘Chemical Oil Services Facility’, after it was discovered that the project requires no Environmental Impact Assessment (EIA) be conducted prior.
The Environmental Protect Agency (EPA), via a public notice, announced that Falcon Logistics Inc., plans to construct the facility for storage, handling and transportation at Area MM Rome Industrial Area.
An EIA is done to evaluate the likely environmental impacts of a proposed project or development, taking into account inter-related socio-economic, cultural and human-health impacts, both beneficial and adverse.

However, the EPA in its notice stated, “In accordance with Section 11(2) of the Environmental Protection Act, Cap 20:05, Laws of Guyana, the application for the project listed above has been screened by the agency to assess the potential environmental impacts, and it has been determined that the project will not significantly affect the environment nor human health, and is therefore exempted from the requirement for an Environmental Impact Assessment (EIA).”

Be that as it may, it is still allowing the general public a 30-day period to lodge any objections or concerns about the project. Appeals and objections can be submitted to the Environmental Assessment Board at the EPA’s Sophia, Georgetown office.
Residents in the area, however, are more concerned over the fact that the EPA is not mandating that an impact assessment be conducted.
“Over the last few months, it has become clear that the EPA does not perform their due diligence and require a proper Environmental Impact Assessment for oil and gas service companies,” one resident pointed out.

Even more concerning, the residents noted, is the fact that the EPA would post a public notice, “and hope it goes unnoticed by citizens of the impacted community who most times do not have the representation or knowledge base to respond.”
Prior to this, several other objections were made to petro chemical related projects.
Back in 2019, Nalco Champion had proposed a chemical plant be constructed at Houston, Industrial Site, Ruimveldt – a residential area.

However, after residents objected noting the carcinogenic nature of the chemicals to be stored there, the company abandoned plans and took their operations over to Trinidad.
Then in October of this year, residents of Peter’s Hall objected to another proposed ‘Chemical Storage Warehouse Facility’ to be constructed by GLASS Holdings Inc.
GLASS Holdings Inc. had stated that they planned to store chemicals such as “Asphaltene Inhibitor, Corrosion inhibitor, Biocide, Hydrate Inhibitor, Demulsifier, Chlorine Scavenger, Defoamer and Hydrate Inhibitor.”

But even with those chemicals on the list, the EPA stated that the project did not require an EIA.
The project was later halted after residents raised similar concerns as the facility was going to be constructed in close proximity to residential neighbourhoods.
A resident from Peter’s Hall had lamented to Kaieteur News that, “The EPA ruled that the analysis is not needed, so they are not requiring it. Well, that is very unsettling. It seems to me that petroleum waste and products have high vapour pressures and consequently will leak into the immediate atmosphere and surroundings with the best of intentions. This means that air quality and its effects on our health and our homes are of a major concern.”

With that in mind, the residents from Agricola are demanding that the EPA conduct an impact assessment before construction commenced.
“If the EPA previously determined that such an operation should not be established close to nearby residential communities, then why is it acceptable now? Would the residents of Houston, Rome, McDoom, Agricola and even communities on the West Bank not be impacted in a similar manner?”