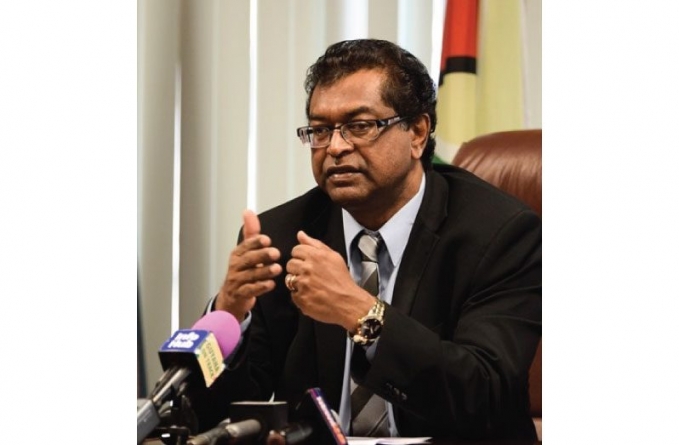 THE 1997 Elections in Guyana were nullified because, while the country’s leaders came to an agreement that the possession of an Identification Card should be mandatory for voting, this was contrary to the Constitution.

That’s according to Leader of the Alliance for Change (AFC) Khemraj Ramjattan, who went on to say that the foregoing observation should serve as a prime example to those who now uphold the National Recount Order No. 60 in part, when it has been established by the Caribbean Court of Justice (CCJ) to be “in tension” with the Constitution.

Delving deeper into the subject of the December 15, 1997 elections, Ramjattan said Sunday while speaking on an APNU+AFC-sponsored programme that following the polls, one Ester Perreira filed a petition on February 25, 1998 under Articles 60, 162 and 163 of the Constitution, the Representation of the People Act Cap. 1:03 and the National Assembly (Validity of Elections) Act Cap. 1:04, claiming that the elections were not free, fair and valid, and the results were affected.

The petition, he recalled, was heard by Justice Claudette Singh, now retired and current Chairperson of the Guyana Elections Commission (GECOM). The hearing of evidence took more than two years, and concluded on May 22, 2000. Addresses to the Court by the lawyers lasted three months. Thereafter, the learned trial judge gave her 77-page judgement on January 15, 2001, and made further Oral Orders on January 26, 2001.

Taking his audience back down memory lane, Ramjattan said Singh ruled that Act 22 of 1997, which amended the electoral law to make ID cards the only voting prerequisite, had breached several statutes in the Constitution. She ruled that “Act 22/97 is ultra vires, null and void Articles 59 and 159 of the Constitution” and that the 1997 elections were not conducted in accordance with the provisions of the Representation of the People Act (ROPA) Chapter 1:03 and articles 59 and 159 of the Constitution and therefore vitiated.

He said that prior to the Court’s ruling back in 1997, the Government and Opposition had agreed to make the presentation of an ID Card to vote mandatory, and that everyone was pleased with the decision.

However, this did not change the fact that their actions, unbeknownst to them at the time, were contrary to the Constitution, and therefore, despite their agreement, it had to be dismantled.

A member of the ruling People’s Progressive Party/Civic (PPP/C) back then, Ramjattan said Sunday: “We all agreed [the PPP/C and other parties] on this law, and we passed the law in Parliament that voter ID card should be the basis and, in the elections petition matter, that law was decided on that notwithstanding we all agreed to this thing, voter ID card as a requirement is not Constitutional. Not because you agreed to it.”
Warming to the topic, he said: “The whole election was held illegally as a result, because it was based on voter ID card. And we had agreed to that; both parties! In similar terms, I understand that there is an argument going on in Court that notwithstanding there might have been an agreement for a recount, it might very well be unconstitutional too.”

He recalled that in handing down her January 2001 ruling, Justice Singh had reasoned: “What is the effect of Act 22 of 1997? This Act introduces the concept of ‘no card, no vote’; that is, it made it compulsory for a person to have a voter’s identification card in order to vote. It would follow, therefore, that the constitutional right to vote would be denied to any person who did not produce such a card. There is nothing wrong with Parliament enacting such legislation, but any such law ought not to be inconsistent with the Constitution.”

THIRD OF ITS KIND

Chief Elections Officer (CEO) Keith Lowenfield submitted his report on the recent elections to GECOM earlier this month, showing a win for the APNU+AFC. It was the third of its kind since the conduct of the March 2, 2020 General and Regional Elections and is, for the first time, reflective of the declarations made in March 2020 by the Returning Officers in the country’s 10 Electoral Districts.

There is now great national debate, as well as amongst GECOM Commissioners about whether Lowenfield’s report should have been guided by the March 2 elections results from the 10 declarations, or the subsequent national recount which the CCJ picked apart.

The CCJ, in handing down its recent judgement, had noted that the Constitution trumps Recount Order No. 60 in the areas where there is contradiction. It also highlighted that the election of a President and members of the National Assembly can only be done “on the sole basis of votes counted and information furnished by Returning Officers under the Representation of the People Act.”

Therefore, in his most recent report, the CEO reminded the Chair that the national recount was not undertaken by Returning Officers. “The concluding opinion [Paragraph 52] of the CCJ’s judgement states that Order 60 is in tension with the Constitution of Guyana, and could not create a new election regime,” Lowenfield had said.

Meanwhile, on the arguments of whether or not the Recount Order was set aside by the Court, the AFC leader said that one cannot deem a legal Order to be in “tension” with the Constitution, but simultaneously seek to up hold it, selectively, for political benefit.