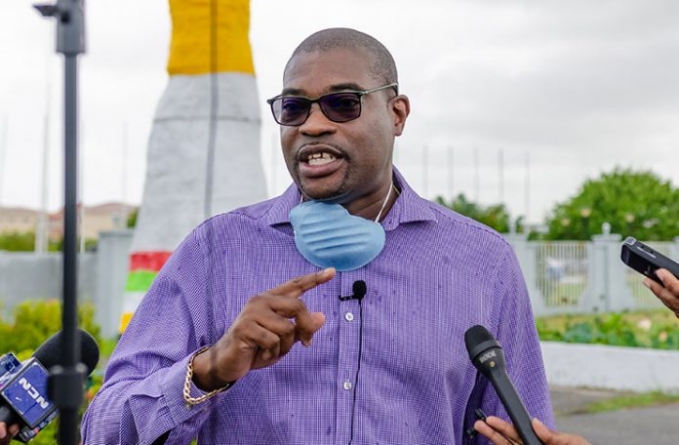 With concerns growing over political parties not submitting their 2020 electoral expense reports, Kaieteur News posed questions to the Alliance For Change (AFC) to ascertain why the Coalition, which it is a part of, failed to adhere to the clear provisions set out in the Representation of the People Act.
At a press conference yesterday, General Secretary of the Alliance For Change, David Patterson, in response stated that while he could not speak for the A Partnership For National Unity (APNU) Coalition, his party submits yearly financial reports to the Company Registrar since it was incorporated in 2005.
Patterson explained that, as part of its corporate obligations, each year, the AFC submits detailed financial reports which include expenses incurred during each election season.

“So basically,” Patterson stated, “our finance reports includes all our election expenses etc. for every election that we would have contested, our contributions in 2015, including our contribution in 2020. So while, I can’t answer for the Coalition, I know for sure that you can go back to any of our reports and see our financial statements. 2020 will be done at the end of the year.”

Patterson’s response however, did not answer the question at hand. The issue of election expense reports being submitted came to the fore after Chartered Accountant and Transparency Advocate, Christopher Ram, raised the issue with the Chair of the Guyana Elections Commission (GECOM). Kaieteur News also sent questions to Leader of the Opposition, Joseph Harmon, regarding the Coalition’s failure to adhere to the law, but up to press time, no response was received.

Ram had written to the Chair, Justice (Ret’d) Claudette Singh, back in September, pointing to Section 108 of the Representation Of the People Act (ROPA) dealing with Election Expenses Reports. That section requires the election agent of each group of candidates to submit that report within 35 days of the declaration of the results of the elections.
According to Ram, the Chair noted the six-member Commission had advised her that “although cognizant of the law, those sections were never operationalized.”

So far, in addition to the Coalition, the governing People’s Progressive Party Civic (PPP/C), along with the other smaller political parties continue to violate the Constitution on this issue.
Kaieteur News reached out to the PPP/C party agent, now Agriculture Minister, Zulfikar Mustapha, to enquire when the party expects to submit its report.
He stated “I don’t know I have to check with the party. I don’t know if GECOM asked for it because normally, GECOM send a letter for these things so I don’t know if they asked it.”

Shaz Ally of The Citizenship Initiative, when asked the same stated “Not as yet, we drafted it sometime in October. Then we were hit with some sad news but we are going to submit it on Tuesday December 15 at GECOM headquarters to the Chair.” TCI’s Leader, Rondha-Ann Lam, suffered a personal tragedy some weeks ago.
Kaieteur News also reached out to Kian Jabour from A New And United Guyana (ANUG) and was told that he is unaware whether the report was submitted. This paper also attempted to reach out to Lennox Shuman, leader of The Liberty and Justice Party (LJP), but efforts proved futile.