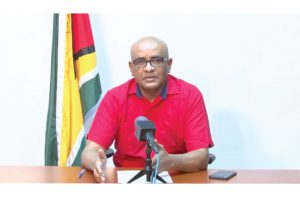 The 2016 Stabroek Block Production Sharing Agreement (PSA) that Guyana signed with ExxonMobil is fraught with fiscal loopholes. One of these speaks to the absence of ring fencing provisions. As a result of this state of affairs, ExxonMobil can transfer costs from unsuccessful wells to those that actually are. It can also transfer costs from developing wells and deduct it from producing wells. This results in a reduction of the profits that would be available to split between the government and the oil company.

During a recent interview with Kaieteur News, Vice President, Dr. Bharrat Jagdeo, was asked to say how such fiscal loopholes would be addressed. The former Head of State acknowledged that indeed this is a challenge but was keen to note that it would not be allowed for the Kaieteur and Canje blocks which the American multinational intends to drill before the end of the year.

Further to this, the official said that the government has taken steps to set up a committee which would provide advice on these matters, among others. Dr. Jagdeo said, “…They will say, ‘this is what you can achieve in light of the loopholes in the contract.’ They are going to put together a negotiating brief which will say – ‘here are the activities that could form part of local content and help Guyana retain more value’.”
The official said that the government will be benefiting from the experience of Trinidadian Petroleum Expert, Anthony Paul, and the others. “We will talk to them (because) this is about getting more value for our people,” the Vice President expressed.

IMF CONCERNED
Since 2015 to now, the International Monetary Fund (IMF) has expressed serious concern about the absence of effective ring fencing provisions in Guyana’s oil deals
In 2018 for example, the IMF warned that Guyana could very well experience delays in receiving its portion of the profits from ExxonMobil’s Liza Phase One Project. According to the Fund, ExxonMobil can allocate costs from any oil well or even the entire field, to another due to the absence of the said provisions. This means that expenses from the entire Liza Phase One Project can be carried over to Exxon’s Liza Phase Two Programme.

ExxonMobil has already told the IMF that the cost to develop the Liza Phase One Project will be approximately US$4B. The Liza Phase Two is projected to cost over US$8B.
The Fund warned, “This asymmetrical (irregular) treatment of profit and cost oil will benefit the contractor at the expense of delaying government revenue. For example, in the case that multiple fields are developed, the amount of profit oil to be shared from the first producing field will be reduced by costs incurred in developing subsequent fields. This could have significant implications in terms of delaying government revenue, especially in a large, multi-field project.”

The IMF also bemoaned the size of the contract area ExxonMobil has control over. In this regard, it stated that the contract area of the Stabroek block is disproportionately large by international standards. Kaieteur News would have reported that the block is equivalent in size to 1,150 Gulf of Mexico blocks and contains multiple prospects and play types representing additional multibillion barrel unrisked exploration potential.
The IMF strongly suggested that the government of the day should consider a ring-fencing rule for future developments.