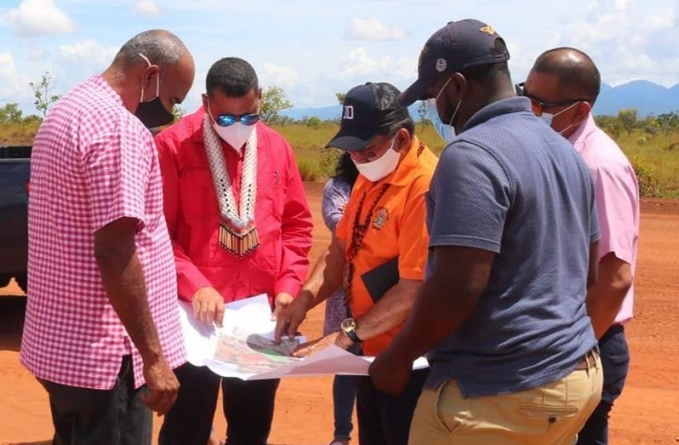 IN excess of 130 acres of land at Poke Bridge, Lethem, Region Nine, will be explored for a new housing, as the Central Housing and Planning Authority commences a block and topographic survey there.

On Saturday, Housing and Water Minister, Collin Croal; Lethem Mayor, John Macedo; Regional Chairman, Brian Allicock; and Regional Member of Parliament, Alister Charlie, were led on a visit to the site by surveyor of the Central Housing and Planning Authority, Shaquelle Mayers.

The minister and regional officials were briefed on the plans for the area and how they will benefit the region.
Mayers and a team from the housing agency are expected to commence their work in the area on November 20, 2020.
Upon the conclusion of the survey, the CH&PA will proceed with the design and layout of the scheme which will yield some 800 lots.
This surveying exercise will further consolidate and kick start the process with the Guyana Lands and Survey Commission.

“2021 will be an exciting year for the housing sector. We are looking to start allocation in 2021, and when we make an allocation, citizens can look forward to being allocated lots in schemes with all the necessary infrastructure,” Minister Croal said.
According to Minister Croal, this is part of the ministry’s commitment to providing adequate and affordable housing for all Guyanese. Simultaneously, the minister said the ministry was working, along with other state agencies, for the acquisition of lands to realise the Government’s vision of providing 50,000 house lots, over the next five years.

While speaking about the new development for Region Nine, Minister Croal said that will translate into building village economies while creating employment.
“The housing and construction sector can further strengthen village economies. The opening of new housing development would mean people will be given house lots and can start construction,” Minister Croal said. The construction sector, the minister said will provide direct employment for villagers.
Residents were also told of the Government’s plan to reintroduce a vibrant hinterland housing project in 2021. This programme, the minister said will ensure that vulnerable families in hinterland regions are adequately housed.

Also, over the weekend, the minister and a team from the Guyana Water Incorporated visited and held community meetings in a number of villages in Region Nine.
Meetings were held with residents of Shulinab, Wowetta, and Aranaputa, where discussions were held on the development plans for the respective villages.