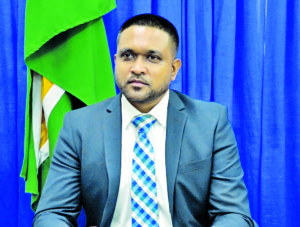 A “situational analysis” carried out by the Minister of Local Government and Regional Development, Nigel Dharamlall, of his Ministry, has found that fifty-six political appointees who were hired by the APNU/AFC Government, would have earned around $1 billion in salaries and other benefits over the last five years.

The analysis was conducted mere days after the PPP/C Government took office and was meant to derive a clearer picture in relation to the financial position of the Ministry and what needs to be done to allow it to carry out its plans and programmes successfully.
“What we found was quite startling,” Dharamlall asserted, during an interview with Room 592 on Monday evening.

In providing a breakdown of what he referred to as “a heist on the Treasury”, Dharamlall related that it was found that the 56 politically-appointed persons would have earned over $810 million in salaries over the last five years.
He explained that when other benefits such as gratuity, which is payable at the end of every six months, and allowances such as leave passage, are added, the total cost to the Treasury amounts to a whopping one billion dollars.

According to Dharamlall, what is even more disturbing is the fact that among the 56 persons who were on the payroll of the Ministry are prominent APNU/AFC activists who were in the forefront of preventing a democratically elected Government from taking its place following the March 2 General and Regional Elections.

“Many of these elements if I were to mention their names; the public would be amazed that these were at the forefront of defending the dictatorship, standing against democracy, standing against the rule of law and standing against our right to count every vote,” the Minister highlighted.
Dharamlall mentioned several names, including those of APNU/AFC activists Ganesh Mahipaul and Randolph Critchlow, who were paid huge sums for doing “political work”.

He added that some of the political appointees hardly even turn up to their place of work and there is no evidence that they were involved in carrying out the work of the Ministry. He pointed to one notable PNC member who reported to his office three half days per week.
“We find that outrageous,” he declared.

“That is the nature of how the past regime managed our country and that is why you find they were willing to sacrifice their professionalism and integrity and defend all the wrongs they have defended in the last year and a half,” he posited.
Dharamlall said in due course, the Ministry will release further details regarding the terms of employment of these persons.

“I see this as a billion-dollar heist on the Treasury by these individuals, and I think they must be held accountable for it”.
He added: “Our taxes were paying them to run an “illegal Government” especially since the passage of the No-Confidence Motion”.
Of note too is that some of the contracts were issued post-March 2 General and Regional Elections; even after it was clear that the coalition had lost power.

According to Dharamlall, based on the amount of money that was spent in the last five years… “it is difficult to see the work that money was spent on”.
“Insofar as the Ministry has proceeded…we were able to terminate their services and we intend to move forward in a professional dynamic way with a staff who are conscious about the needs of our citizens and who are willing and able to work towards satisfying those needs,” he noted.

Since coming to power, President Dr Irfaan Ali and his Cabinet have been weeding out political appointees and others who collected “fat cat” salaries for little to no work, who were inherited from the previous Government. It has been said that such positions existed in almost every Ministry.

One such position happened to be the “Director of Public Parks”, created especially for Retired Lieutenant Colonel Larry London, the man at the centre of the controversial D’Urban Park project.
During a recent interview on the National Communications Network (NCN), Attorney General Anil Nandlall had revealed that London was getting a $500,000 take-home salary in his position as Director of Public Parks, as well as his light bills paid.

According to Nandlall, London was even granted gratuity as high as 22.5 per cent of his salary. Gratuity is a benefit normally afforded to public servants, where they are paid a lump sum at the end of their employment, calculated as a percentage of their pay.