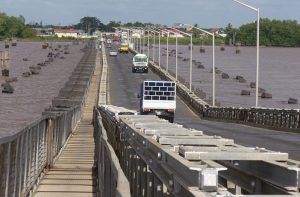 A TOTAL of 42 companies are now vying for the opportunity to design and build a new Demerara Harbour Bridge. On Friday, at the Ministry of Finance, in Georgetown, the bids were opened and counted in the presence of representatives of the bidders, as well as officials of the National Procurement and Tender Administration Board (NPTAB), and subject Ministers, Dr. Ashni, Minister of Finance, and Senior Minister of Public Works, Bishop Juan Edghill.

The process was also streamed live via the Ministry of Public Works’ Facebook page.

“I would like to thank all of the companies, their principals and their technical people who participated in this process. They have now given to the NPTAB and the Government of Guyana real work,” Minister Edghill said.

Following the opening exercise, Edghill assured those present that the rules of engagement would entail “transparency, accountability, and full disclosure to the people of Guyana” at all times.

While an estimated cost has not yet been announced, the bridge is likely to be a “four-lane, high-span fixed bridge in the vicinity of the current location, and terminate at Nandy Park on the East Bank of Demerara”.

According to the EOI, the new design of the Demerara Harbour Bridge will not require opening or retraction to allow for maritime traffic, as is the situation with the existing structure. The new bridge is likely to carry a lifespan of at least 50 years.

“The GoG (Government of Guyana) will consider options under various models, including Design-Build (D-B) and Build-Operate-Transfer (BOT) or any other model,” the EOI read.

Speaking at Friday’s opening of the bids, Dr. Ashni Singh joined Minister Edghill in expressing satisfaction with the level of participation that the EOI has garnered.

“We witnessed probably an unprecedented level of interest in a major infrastructural project in Guyana… The Demerara River crossing is a large and important project; it is one that would make a dramatic contribution to the improvement of our country’s transport infrastructure,” Dr. Singh said.

The Finance Minister added that the current bridge has outlived both its usefulness and relevance to the Guyana of today.
“One merely has to observe the daily traffic congestion on the East Bank Demerara, both in the mornings and evenings, which has contributed to thousands and thousands of lost man-hours, as people endure the daily commute into and out of the City,” Dr. Singh said.

While the existing bridge is unable to adequately accommodate the daily and growing traffic, it is not necessarily a structure that is substandard.

A few years ago, under the leadership of Mr. Robeson Benn, the then Ministry of Public Works had denounced the “myth” that the bridge had an expiration date. It was explained at the time that the bridge is one that can be constantly maintained, in that almost all of its components are “repairable”. It is unclear whether the government will utilise the structure at another location in the country.
Nonetheless, the government has set out an ambitious three-year timeline for the completion of the new Demerara Harbour Bridge.