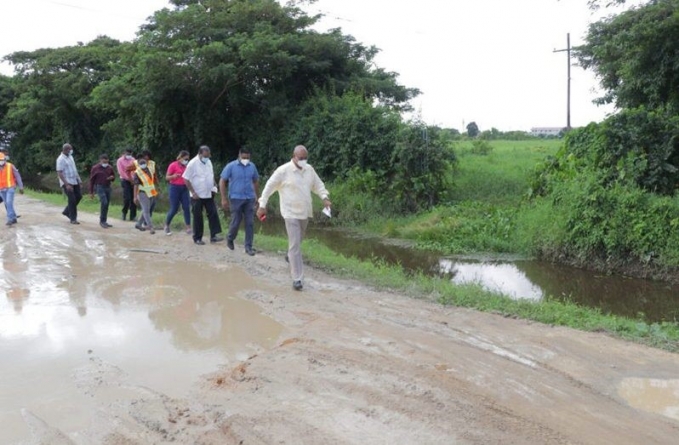 TWO contracts totalling $314 million have been awarded to rehabilitate and reconstruct three streets in the City and in Turkeyen.
A $275 million contract was signed to reconstruct the road which parallels the University of Guyana (UG) and connects UG Road to Sophia. This 900-metre road has deteriorated over the years, despite numerous repairs. The asphalt continues to slip towards the drains on both sides, creating an untenable road.
As such, a new road will be built; one that will be equipped with geotextiles, keeping the foundation together to prevent the current situation from recurring.
The utility poles on the shoulders of the road will be moved to cater for the widening of the road to 6.9 metres.

Also, another contract, valued $39 million, has been awarded to XL Engineering for the rehabilitation of Owen and McDougal Streets, Kitty, Georgetown.
Minister of Public Works, Bishop Juan Edghill, visited the area on Tuesday.

Residents used the opportunity to deplore the appalling state of the two streets.
Bishop Edghill assured them that the 466-metre of adjoining streets would be repaved. The contractor has three months to complete the work.
The minister said the three roads are being done “based upon letters, representations that were made from various communities”.
Minister Edghill also visited the Cummings Lodge area where he relayed that Fourth and Fifth Streets would be repaired soon, while those in Fifth Field, Cummings Lodge, would be looked at under the 2021 programme.

The Public Works Minister said, “we are doing 100 miscellaneous roads; a number of main access roads, urban roads as well as hinterland roads.”
Minister Edghill was accompanied by Minister of Local Government and Regional Development, Nigel Dharamlall; Minister within that Ministry, Anand Persaud, and a team from that ministry.