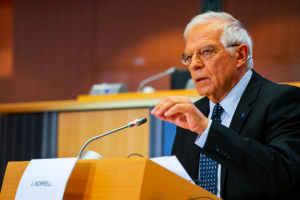 The European Union (EU) has promised that it will not waver in its espousal for a rapid conclusion of the present political crisis in Guyana, “which has gone on for too long.”
The assurance was given by the Acting Managing Director for the Americas for the European External Action Service (EEAS), Javier Nino Perez. EEAS is the EU’s diplomatic service and defence ministry.
In the correspondence with Chair of the Private Sector Commission (PSC), Captain Gerry Gouveia, Perez responded on behalf of the EU’s Minister of Foreign Affairs, Josep Borrell.

He said that the EU has closely followed Guyana’s electoral process “with no small degree of concern.”
In a previous statement, the EU spoke in defense of democracy in Guyana, explaining that the legitimacy of Guyana’s government depends on a declaration of the recount results.

The Union reiterated in the letter to Gouveia that it firmly supports the credible recount results.
“We feel that the clear ruling by the Caribbean Court of Justice provides a solid foundation for a peaceful and democratic solution to Guyana’s post-electoral crisis. It is now up to the Guyana Elections Commission to issue, rapidly, a declaration based on the credible results of the recount certified by the Caribbean Community, ensuring respect for the will of the people of Guyana, in line with the ruling by the Caribbean Court of Justice.”
Perez said that the EU counts on the Commission to conclude this process, ensuring that a legitimate government is sworn in.

This note was published on the same day that the Court of Appeal unanimously ruled to dismiss an appeal of the Chief Justice’s ruling in the Misenga Jones vs. GECOM case, which sought to have the Commission use the tainted district declaration’s as the basis of a final declaration, instead of the credible results of the national vote recount. The Appeal Court ruled that the recount results must be used to make a final declaration.