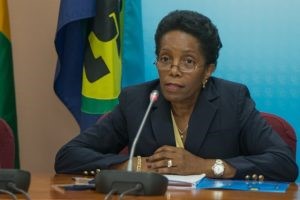 Cynthia Martyr, the Chief Observer of the Caribbean Community’s (CARICOM) Election Observer Mission blasted the Government of Guyana for letting dust settle on reports and recommendations by the observer mission submitted to them in previous elections.

During a press conference yesterday at the CARICOM Secretariat, Turkeyen, the Chief Observer was quite passionate when she was enquired about her level of satisfaction regarding how the government dealt with recommendations given to them.
Martyr emphatically said, “The Mission has not been satisfied at all with the way that the government has been dealing with the recommendations that have been made.

The Chief Observer disclosed that there are two prominent past Prime Ministers of CARICOM Member States, and at least one of them is a signatory to the CARICOM treaty, CARICOM agreement, and CARICOM commitment to the democratic process.
According to Martyr, one of the high points of that CARICOM treaty was based on the settlement of disputes and based on mediation.

She explained, “So having attended with Chiefs of Missions to the Guyana Elections in 2020, I believe that it is not critical for them to start to play their parts, because clearly, the part that they played when they were leaders did not amount to anything.”
She further added, “It seems to be that they would have to go back to the basics because obviously what they have been doing is not working…

I even volunteered my services as a well trained mediator to assist them in that process in trying to do good for the Guyanese people, and to assist the leaders of Guyana to get something going.”
Guyana is still in the same situation, electorally, as it was all those years ago, she added.
“So, I am determined to impress upon these two leaders that they have to find some way to assist Guyana [and] it looks like we’ll have to actually hold Guyana’s hands,” Martyr said.

Nevertheless, she noted that CARICOM is committed to the preservation of the democratic process in Guyana, and therefore, the community can, through diplomatic interventions, assist Guyana in bettering its systems.
CARICOM impressed with election processes

“The March 2, 2020 poll was free, fair and transparent and the [CARICOM observer] Mission expects that the results of the poll will reflect the free expression for the will and aspirations of the Guyanese people,” Martyr posited.
The 17-member mission comprised nationals from Antigua and Barbuda, The Bahamas, Barbados, Dominica, Haiti, Jamaica, St. Vincent and the Grenadines, St. Kitts and Nevis, St. Lucia, Suriname and Trinidad and Tobago.
The delegation has been in Guyana since February 24 and has engaged in talks with several key stakeholders including electoral and government authorities, representatives of political parties, trade unions, civil society and religious groups and other election observer missions.

Deployed to approximately 360 polling stations across the country, the observers witnessed the election process and the conduct of the poll from opening to closing through the subsequent counting of the ballots.
They described this process and free, fair and credible.
Largely satisfied with the pleasant atmosphere of peace and calm amongst electors, the observer mission noted that there was no sign of hostility among the electors on Elections Day.

GECOM staff and polling agents were commended on a job ‘reasonably well done’ by Combie-Martyr who cited their experience, efficiency and professionalism.
“This is a demonstration of the level and standard of the training provided by GECOM,” she explained.
Reiterating the smoothness of polling, the overseer mission revealed that the polling places have met GECOM standards.
While there were some concerns about access for persons living with a disability to exercise their franchise, CARICOM observer mission said they were impressed by special consideration and additional assistance given by Presiding Officers, other GECOM staff and Election Day volunteers.

“The CARICOM Election Observer Mission is committed to ensuring the preservation of the democratic process and to make certain that every valid vote cast must be counted, to be regarded as a vote for the party of the elector’s choice,” Combie-Martyr related.