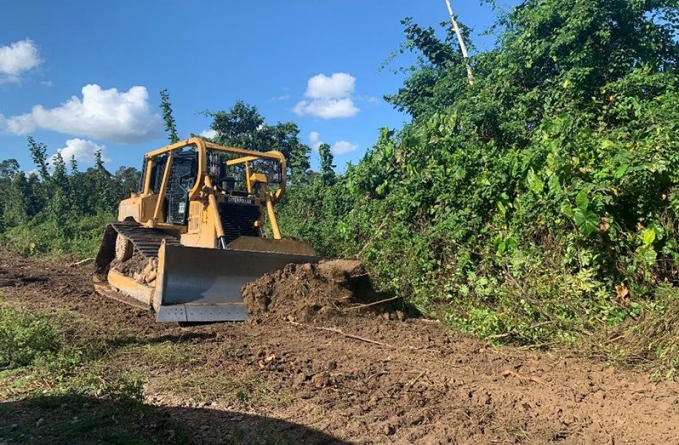 TWELVE persons, including a supervisor, from the community of Mara, East Bank Berbice, were hired as community enhancement workers under the Community Infrastructure Improvement Project (CIIP).

On Monday, the Regional Chairman of Region Six (East Berbice-Corentyne), Mr. David Armogan, and the Vice-Chairman, Mr. Zamal Hussain visited the community where the contracts were handed over to the workers.

Following a recent community meeting with Agriculture Minister Zufikar Mustapha, residents and farmers highlighted the need for works to be undertaken in the community. As such, the request was forwarded to the Ministry of Local Government, and according to the Regional Vice-Chairman, the aim of the programme is to provide employment, and raise the economic status of residents.

“We know several years back we had 50-odd workers; after the new Government took over, the programme died in this area. We as the Government are trying to create employment while trying to enhance communities, so we trying to ensure that in every area, we build some amount of working-class people who are unemployed to facilitate the enhancement of communities,” Hussain said, adding: “The persons that will be in this area to do the CIIP work will help the economy of Mara, since the persons were not employed; we try as best as possible to choose persons that are unemployed.”

He noted that Mara is lucky to have so many persons on the project, since the national budget only catered for 700 CIIP workers, in toto. He, however, assured Mara residents that in time, and as the need arises, the government will seek to employ more persons in each community.

The workers are tasked with cleaning the drains and road shoulders, among other chores.

Meanwhile, the regional team also inspected some shoulder-clearing works being done on the roads in East Bank Berbice communities, such as the clearing of overgrown vegetation along the road shoulders that have become an encumbrance. Regional Chairman Armogan noted that the works are in keeping with the government’s policy of ensuring every community is developed, irrespective of its location.

“We have to task ourselves again to put these things back into place, so that the people of Mara can benefit in a way they are supposed to, like everybody else outside of the East Bank area. The policy of the government is to provide for every community, whether they belong to town, rural or far-out villages,” he said. “Our job is to make sure you are comfortable, and your area is kept clean and tidy.”

Residents also asked for the potholes on the roadways to be fixed, but as the Regional Chairman explained in response, even though such works were not budgeted for, the region recognises the need, and will be using any excess funds to fix at least a few of the large ones.